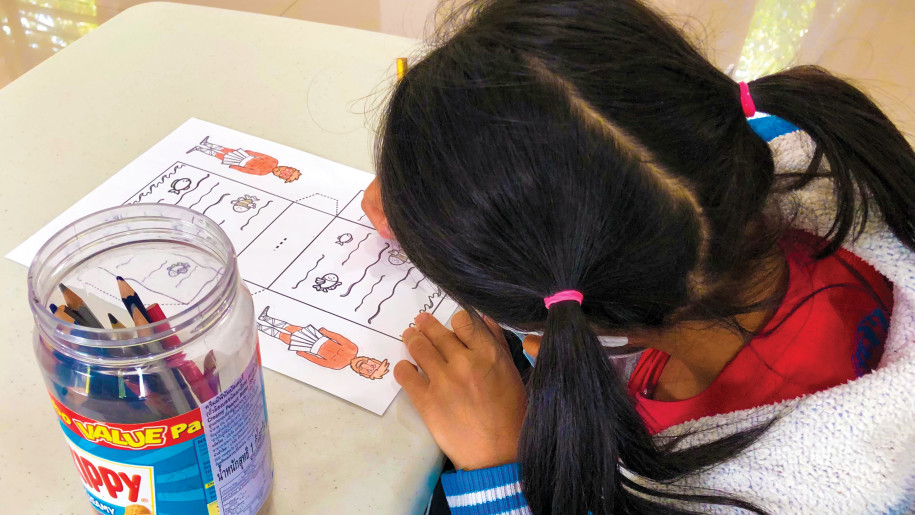 “But when He saw the multitudes, He was moved with compassion for them, because they were weary and scattered, like sheep having no shepherd” (Matt. 9:16 NKJV).

“The relationship between God and people of faith can be understood as an attachment bond, in which God is a safe haven, a secure base, and the ultimate source of comfort and care” (Created for Connection by Dr. Sue Johnson with Kenneth Sandefer).

The sun had already set, and the stars were just starting to twinkle in the night sky as I guided a group of students home from the learning center. Some were walking or skipping by the edge of the road that cut through a rice field. Some were on bicycles, slowly pedaling along. One seven-year-old girl was perched precariously on the passenger seat of her friend’s bicycle.

Suddenly, I heard a thud and then wailing. The little girl had tried to stand up on the back of the bike and lost her balance. Falling onto the rough pavement, she had skinned her knees quite badly. One knee in particular was bleeding profusely.

Along the way, I heard a vehicle approaching from behind me. Turning around, I saw that it was the little girl’s uncle driving home in his pick-up truck. We made eye contact as he got close, and I smiled at him, expecting him to stop and see what was wrong. But he just drove on without stopping.

When I reached the girl’s home, I saw her uncle’s truck parked in the front. I called out for someone in the house, but no one responded. The lights were on inside, and I could see that the TV was on as well, so I carried my student in. Her uncle was sitting on the floor looking at his phone. He didn’t bother to look up at us as I set the girl down gently on the sofa. After wishing her a good night’s sleep and sweet dreams, I left.

The next afternoon, I returned to the girl’s house to check on her and see if she wanted to come to the learning center. I found her sitting on a chair making a poor attempt to change one of the bandages on her knees. Her grandmother slept soundly on the sofa nearby. I told the girl not to worry, and that I would get a fresh bandage from the first-aid kit at the learning center. The grandmother stirred awake and thanked me for coming to get her granddaughter. She then lay back down and returned to her nap.

Many of the kids we work with are regularly ignored and even neglected at home, and this causes them to feel deeply insecure. It is a terrible weight of responsibility for a small child to care for themselves and even their siblings with little or no guidance. In our ministry, we try every day to help our students understand in a practical way that God is a real person who loves them and is involved in their lives—to know that they are not alone and not ignored, and that Someone is always there to care for them.