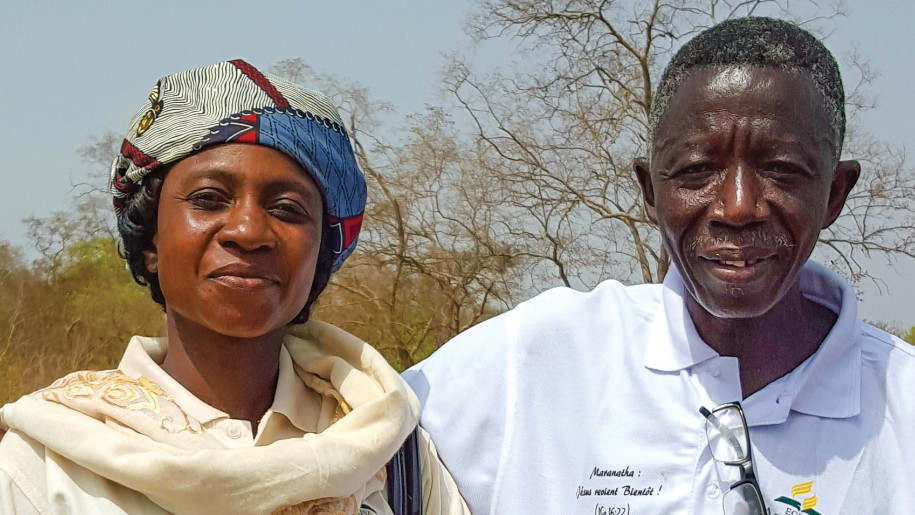 Papa Ibalowo, a retired post office worker, became a baptismal candidate in our little Adventist congregation in 2012. However, because of his polygamous marital status, he could not be baptized until June 2014 after he had separated himself from his second wife. This is the story of his first wife’s decision to join the Adventist church, which she considered to be the means God used to return her to a monogamous marriage.

Papa Ibalowo and his wife are not Dendi, but they belong to a tribe that is traditionally Muslim and has a long history of polygamy, as do the Dendi. Ibalowo’s eight children are from three different mothers. Sadly, the mother of his two oldest children, now in their thirties, passed away years ago.

Mrs. Ibalowo lost her happiness seven years ago when her husband took another wife. Most educated men like Papa Ibalowo keep their wives in separate households with their children to reduce the many tensions inherent in polygamous families. But Papa Ibalowo chose to keep his family under one roof. So Mrs. Ibalowo had to share her husband’s affections, care and resources with another wife and her children.

As a West African, dealing with polygamy in my mission field is not as shocking to me as it might be for a Western missionary. According to the Ethnographic Atlas, of 1,231 societies noted, 588 had frequent polygamy, 453 had occasional polygyny, 186 were monogamous, and four had polyandry. I estimate that about 70 percent of Dendi men have two or more wives, and that number rises to about 95 percent of Dendi men over age fifty. Younger Dendi men are often reluctant to take multiple wives, though Islam permits them to take up to four. Their reserve is due to the cost of living and their exposure to Western education.

Though polygamy is deeply rooted in many cultures, I have witnessed in my ministry that women in those cultures often suffer greatly when forced to live with a polygamous husband, especially when those women are educated. That was the case for Mrs. Ibalowo. The drastic change in her spirit and demeanor came as a surprise to Papa Ibalowo, who assumed she would adjust to the second wife since polygamy had been in her family for generations.

Polygamy continues to be a major issue for the Adventist church in Africa. Our East Sahel Union Mission has very clear and straightforward policies about polygamy: Wives of a polygamous man can be baptized because each is married to only one man. However, a polygamous man cannot be baptized until he divorces all but his first wife. In the church’s policy, the first wife is considered the only legitimate wife, even if not legally married. All other subsequent wives are illegitimate and considered concubines.

Of course, the application of the policy is rather difficult and unpleasant and has been a source of serious debate among Adventist ministers in our union. Divorce is often devastating for the abandoned women and children and causes them to hate the church. However, in the case of Ibalowo’s family, we praise God for turning a tragedy into an answer to prayer.

For three years Papa Ibalowo explained to his second wife his new faith and how he wanted to obey God and see her do likewise so that they would all be blessed. However, the second wife suspected that the first wife was using mystical power to manipulate Papa Ibalowo into getting rid of her. Tensions in the family continued to escalate, and then tragedy struck. The second child of the second wife, a four-year-old girl, became seriously sick and died. Doctors discovered that the girl had been suffering from sickle-cell anemia. Blood tests confirmed that both Papa Ibalowo and his second wife were carriers of the sickle-cell gene, meaning that any future children had a 25-percent chance of sickle-cell disease. This scared the second wife who was influenced by traditional African superstition, and she decided to terminate the marriage.

Out of this tragedy God gave a gift of new freedom and joy to Papa and Mrs. Ibalowo. Recently, Mrs. Ibalowo decided to fully join our local church. She was present with her husband at our couple’s day on Sunday, April 3, at the W National Park, one of the biggest parks in West Africa. Please pray for three other men in similar polygamous situations who are also praying for God’s intervention.

Two issues come up for me as I read this article.  The first: baptism is not the same as membership into the sda church; and the second is the way the “other” wives are treated in a culture where women’s rights are minimal.

Baptism is a person’s public statement of belief in Christ’s redemptive power in their lives and is a separate issue to membership in the sda church.  Baptism should be left as a conviction from the holy spirit.  sda’s make it come with strings attached.  Why don’t we provide people the opportunity to be baptized then educate them on the benefits of membership into our church when they are ready (ie, to follow our membership standards).

Secondly, how are “concubines” treated in African culture.  Are they second cl***** citizens?  Do they have a say in being an“other” wife in a polygamous marriage and then concubines after their divorce?

Is our sda community looking after their needs, not only spiritually, but as they reconcile their new status.