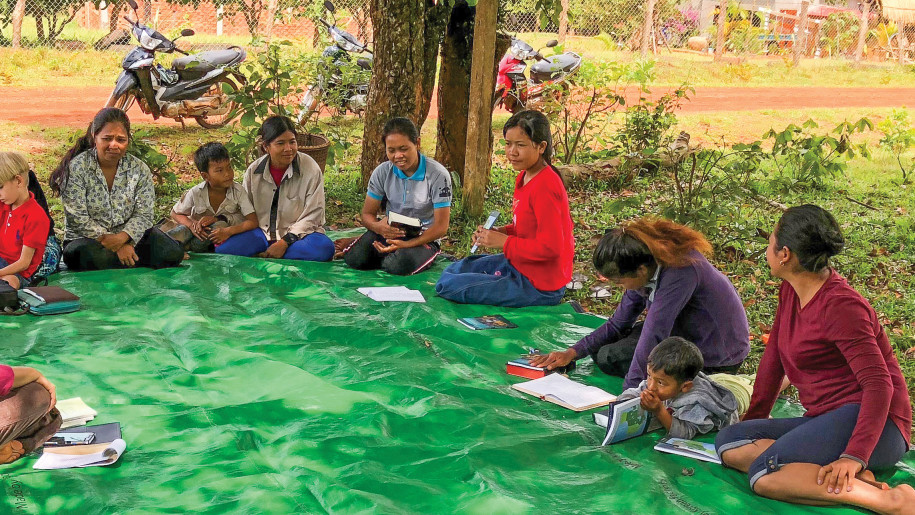 “Pech, Pech!” The voice seemed far away. Pech tried to open her eyes. Who was calling her? Everything was dark. The smell of rotting trash filled her nostrils as she tried to move. But she was pinned under heavy objects. Wait . . . the objects were being moved! Straining to see who was lifting them, she saw a bright being clothed in white. The angel helped her to her feet, and before she knew what was happening, he had taken her to the police station a few kilometers away. Leaving her at the gate, the angel disappeared.

Scenes from the night before came flooding back. The argument . . . yes, that was the last thing she remembered. Her secret boyfriend had wanted to talk to her alone. Since he was the nephew of the local district pastor, and their family was prominent in the Christian community, maintaining the family honor was very important. He had told her they needed to break up—he being a Khmer Christian, and she being a Pnong Christian and carrying his child of five months, now beginning to show.

Hearing his words, Pech’s heart had broken. Hot anger had surged through her veins at this supposedly Christian young man who had pledged his love to her. “But what about me? What about our baby?” she had pleaded. “Don’t leave us! We need you!”

Angrily, Pech’s boyfriend slammed his fist into her face. Pech crumpled, unconscious. In a panic, the young man grabbed a rope and strangled Pech until he was sure she was dead. Then, under the cover of darkness, he took her to the dump and buried her under trash. He was sure his deed was hidden. After all, no one knew of their relationship. Pech would disappear. People would probably think she had been abducted by traffickers.

Our second Sabbath after purchasing our new church property in Lauka Village, we gathered for worship on a tarp spread in the shade of an acacia tree. There couldn’t have been a more splendid setting for worship! Our Pnong friends were excited to have their own church plant in their own village. They were also excited that plans were being laid to build a simple, Pnong-style church out of bamboo that they would cut from the forest.

We sang, prayed and delved into a Sabbath School study. Then we concluded with a simple Discover Bible Study. Our series is taking us chronologically through key Bible stories, which we study and discuss as a group.

As our study ended, Greg asked if anyone knew of someone in need whom our group could help. Sokcheit, the husband of one of our baptized ladies, told us about Pech who was in the hospital. So, that afternoon, our group visited Pech and her family.

Pech’s family’s pastor was the uncle of the perpetrator. After promising to help look after Pech’s family during this difficult time, he and his whole family had run away to another province. Pech’s family felt deserted and uncared for. They were so grateful that we had come to pray with them and provide food for them. Pech’s mother cried in my arms, fearful of what might happen when the perpetrator gets out of jail. We assured her of God’s deep love and that He has a special plan for Pech and their whole family. He would continue to protect them like He had protected Pech. As Pech’s mother repeated the angel story, other patients crowded around to listen. At the far end of the large room, still others were re-telling the miracle to more people.

As many in the local Christian community struggle with these events and with feelings of anger at their spiritual leaders, will you pray with us that God will use this tragedy for His glory? Pray that God will use us to bring Jesus’ love to them and that they will be drawn to learn more about the Adventist church in their community.