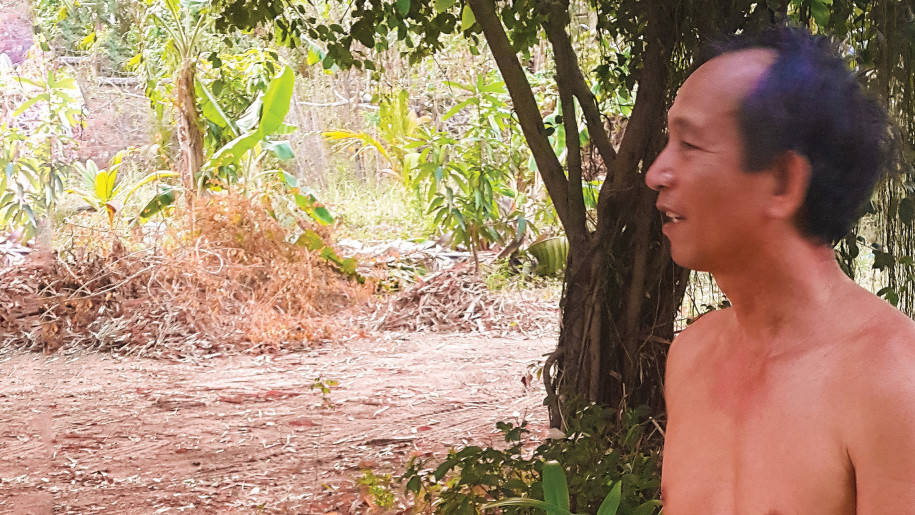 Smack! I jumped back as a huge fin slapped the water. What kind of enormous fish was lurking in our landlord’s backyard pond?

“Poke” is what his name sounds like to me. He is always puttering around his house and garden and never seems to sit still. This kind, gentle man and his wife are well into their 60s and still live on the same property where she grew up.

Poke mows about an acre of grass beneath his fruit trees with a weed whacker because he has no lawnmower. Often he is dressed only in what appears to be a pair of boxer shorts. He rarely complains except when he has issues with his back or kidneys. He beams at me when I bring him the rent, and he always sends me home with coconuts or some other fruit he has grown.

For a long time I have marveled at the productivity of Poke’s gardens and orchards, and just recently I learned his secret. He and I were talking about his garden as we worked together on a small project in front of one of his houses. “Would you like to see why my garden does so well?” he asked.

Poke led me down a path to his backyard, stopping beside a small fenced pond, perhaps 12 feet in diameter and 6 feet deep. He asked me to wait a moment as he went inside his house. I wondered what was in the pond. It smelled of fish, but a layer of surface algae hid its depths. Maybe there is nothing in it but stagnant water, I thought.

Poke returned carrying a huge bag of frozen fish, which he began to cut into small pieces. Then he flung a handful into the pond. Smack! I leapt back in surprise as a huge tailfin broke the surface and slapped the water. As Poke threw more food to these beasts, I got a better look at them. They looked like some sort of catfish, the largest I had ever seen. I counted five of them, each with enormous tails and gaping mouths big enough to swallow a navel orange. They were about four feet long and a foot across. Now I understood why the pond was fenced. I wouldn’t want to fall into the water with those colossal fish!

Poke laughed when I jumped back, and his wife said something like, “Those are mean fish, and I wish you would get rid of them.” But then Poke explained to me that these fish were the reason his garden and orchard grow so well. He pumps his irrigation water from the bottom of the pond along with the fish waste, which is excellent fertilizer. Amazing ingenuity!

During some of our times together, I tell Poke about God who cares so much for him. He is starting to understand and believe in God. He told me his grandmother also believed in the Creator God. I told him that Jesus is coming back someday, and I offered him a book about Jesus’ life. He said would like to read it. So Diane and I gave him Steps to Christ in Khmer. He now reads it a little each morning and evening.

Please pray for our landlord Poke as he learns about Jesus from this book and hopefully from his friends next-door.

Do you have someone like Poke living near you? Spend some time with him or her. You may find someone interested in meeting your friend, Jesus.