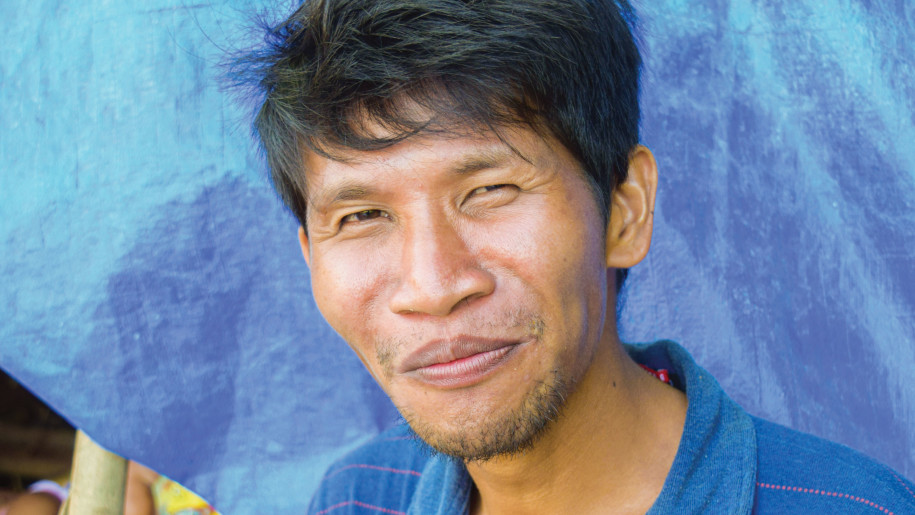 The searing sun beat down on Emmanuel as he climbed the final slope to the village. It seemed like an eternity since he had begun hiking in the muggy darkness of predawn. His clothes, soaked through with dew in the morning, were now soaked with sweat as the afternoon wore on.

Just below the village, an ancient tree spread a little shade, and Emmanuel stopped to let the sweat dry. He knew from experience that once he entered the village he would be interrogated non-stop by the suspicious highland natives. He needed some rest before he faced their investigation.

Over the screeching of cicadas, Emmanuel heard little feet running. Looking up the trail, he saw a naked child hurrying toward him. He expected the child to run away in fright when she saw him. But instead, the child ran right up to Emmanuel. “Older brother! Please come quickly! There is a sick baby in the village. The parents heard that you are coming, and they want you to help. Please come quickly!”

“I’m not a doctor,” Emmanuel replied. “But I will help however I can. Please show me the trail to the baby’s house.”

When Emmanuel arrived, he found most of the village crowded into the tiny bamboo hut built on stilts. As Emmanuel started to climb the ladder, a splintering sound announced the collapse of the floor which had not been designed to carry so much weight. Men dressed in G-strings with machetes tied around their waists started bailing out of the house from all sides through the grass roof which came nearly down to the floor. Once the load had been reduced sufficiently, Emmanuel climbed up into the hut to look for his patient.

“Over there in the corner,” one man pointed.

Emmanuel picked his way through the crowd in the direction indicated. Arriving at last, he looked down in consternation at the little bundle wrapped in a rattan sleeping mat. “Friends! You asked me to come and help your sick baby. But this baby is dead! You’ve already wrapped him up in your mat to bury him. What more can I do to help him? I will just pray to God asking Him to comfort and encourage the grieving parents.”

“No!” the mother cried. “We know God. In ancient times, before the First Sin, we could climb the balugo vine and talk with God, too. We know it was our own sin that cut the balugo vine and disconnected us from Him, leaving us in slavery to the spirits. But we also know that you missionaries can talk to God, and that He hears you. Please pray to Him to bring my child back to life again!”

“Pray to bring your baby back to life again?” Emmanuel was shocked. “I’ve never heard of a missionary doing such a thing. Well, Jesus brought people back to life again. And through His power, some of the prophets and apostles did, too. Maybe it would be okay to ask this of God, if it is His will.”

“Okay,” Emmanuel shouted over the roar of conversation filling the tiny house. “I am going to pray to God to bring life back to this baby. Everyone must be very quiet and respectful as I talk to the great, all-powerful God your ancestors once knew.”

The hut grew nearly silent, something that never happens among the highlanders of Mindoro. The only noise was the clucking of hens under the house and the whimpering of a child who didn’t understand what was happening.

Emmanuel knelt down, put his hands on the little bundle and began to pray. “God in heaven, You are so powerful that You can do anything if You want to. I know that You love the people of this village, and that You want to restore the relationship they broke so long ago by committing the First Sin. But they are scared that the spirits will punish them if they accept new teachings. Please, God, show them that You can protect them from the spirits, and that You want to restore the broken relationship. Please show them by bringing this baby back to life again. I don’t always know what is best, so I ask this only if You see that it is for the ultimate good. In the name of Your Son, Jesus, Amen.”

Emmanuel opened his eyes expectantly. He felt the bundle under his hands, hoping, hoping for it to start to move.

He sat back down as embarrassment flooded through him. Now he would have to try to explain to the people. Why didn’t God answer me? he wondered. Why didn’t He come through? Now the village will probably never let a missionary come in!

Two hours passed in a blur of embarrassment and shame. Emmanuel was about to flee the scene when, without any warning, the little bundle in the corner let out a long, wailing cry and began to thrash around.

“My baby! My baby!” the mother screamed, rushing to the bundle and ripping away the bark cords that bound it. When she finally got the mat open, she found her baby alive and in perfect health!

“Let’s thank God!” Emmanuel shouted, jumping up. “We don’t always understand why He does things the way He does. But we can trust that He will always bring good out of whatever happens.”

A week later, Emmanuel again was climbing the final slope to the village where God had proven Himself powerful. The village had overwhelmingly welcomed Emmanuel, inviting him to live among them as a missionary. The few suspicious elders had been overruled, and Emmanuel had left to gather his few belongings in preparation for a long stay in the village.

Once again, Emmanuel stopped under the ancient tree to dry his dripping sweat. To his surprise, he again heard the pounding of little feet.

“Brother! the little girl cried. “You’ve come back! Oh, but it’s so sad. After you left, the old shaman came. He told the baby’s mother that since her child had been born prematurely, its soul was incomplete. He told her that there was no hope, that it was cruel to torture the baby by prolonging its life. He whispered that the paroy spirits were very, very angry. He said that they would open up the earth under their house with a huge clap of thunder, sending up a fountain of water and killing everyone in the family.
“Oh older brother! The mother and father were so scared. They didn’t know what to do. God had brought their baby back to life. But the spirits were angry, and they feared they would kill them all. They had seen the spirits do such things. They didn’t know if God could protect them from the paroy spirits. So they left their baby on the cold bamboo floor. It cried and cried. The mother cried and cried. The father wiped tears from his eyes. But the spirits, oh the spirits are so cruel. The poor baby died again.”

At this, the little girl burst into tears herself. Emmanuel picked her up and carried her back to the village, his own heart shattered. How can I help these people? When will they believe that God is more powerful than the demons that pretend to be spirits? Oh, God! Help me be a missionary to these people! Use me to bring Your peace and life to those enslaved to terror!

Post Script:
Today, there is a healthy, happy church in the little village where Emmanuel first became a missionary. The father and mother of the baby have come to love and trust God. They no longer fear the spirits or the shaman, and they will never again allow themselves to be bullied by Satan. Most of the villagers are baptized believers, and the church is working to bring the Good News to other villages nearby. Emmanuel’s work is done in this village, and he has moved to another area where he, along with his wife and daughter, still work to lead Satan’s captives to faith in Jesus.