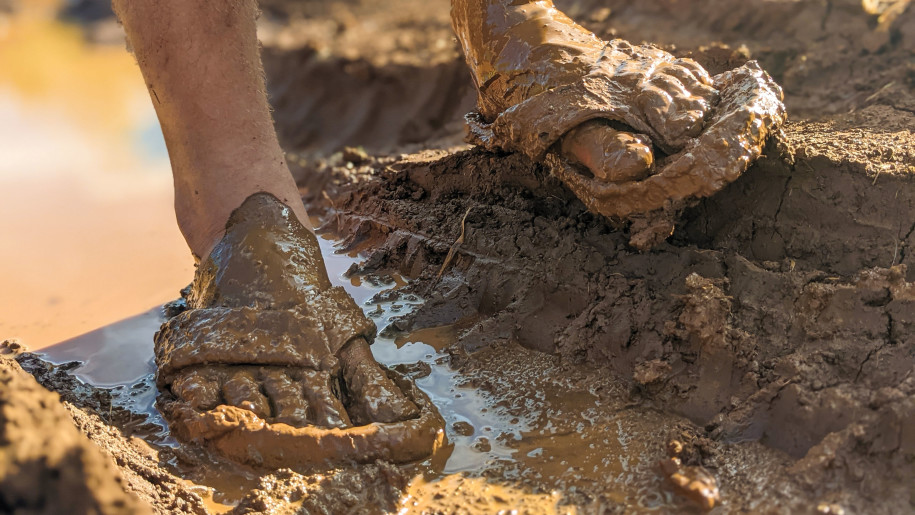 You never know when you may make a new friend—maybe all it takes is getting a little (or very) muddy!

Where to go? Hmmm. The road in front of me had turned into a swath of mud and water. The tracks of many motos were evident—the fate of their drivers was unknown. All of the path options looked less than hopeful. I was not sure which way was the best to go. The motos that had sloshed through here on their way to the village were already through this mess and gone! This time, I couldn’t lean on more experienced drivers.

Not having much time to think, I quickly scanned the road and made my decision. I would take my chances with one track that led through a watery section. After all, driving through the water is often less slippery than driving on the exposed mud, right? I made my advance with my passenger—a local villager—still on board. Previously, I had her get off on bad parts of the road, but I wanted to try it with her still on—you know, like the more experienced drivers. I must have felt confident I could make it, so why not give it a try?

Well, apparently, I was too big for my britches. All was going fairly well . . . that is until the moto began slipping. I tried to catch the moto to give my passenger time to jump off. But I soon realized it was a lost cause in the water-covered mud. I decided to abandon my effort and hopped off the moto, letting it fall into the water.

I turned around to see if she was okay, and my, what a sight! She was perfectly fine, but for the fact that she sat down in the mud when she tried to get off. Now here stood my passenger, looking for all the world like a cookie half dipped in chocolate! I felt bad, especially since I had been told that I was a better driver than her (hence why I was the one driving), and now I had dumped her in the mud.

The mud was on everything: on her, my backpack, one-half of the moto and me. After attempting to wash ourselves up and clean off the moto, we were off towards the village again. But this time, there was a difference—she was driving.

I have had moto spills before (albeit this was the messiest one). Often my passengers haven’t been exactly pleased with me afterward. How much more would experienced locals be annoyed at my dumping one of their own in the mud!

But I was in for a pleasant surprise—my passenger seemed to treat me more like a friend after I dumped her. Imagine that! Her dad kept joking that I was a good driver and said something about flying (my limited Khmer was failing me, so I didn’t quite understand). The other villagers in our group took care of me, driving me the rest of the way and part of the way back (I could have driven, but that’s Cambodian hospitality for you). I had the strange feeling I made more friends because I dumped her in the mud than if we had all remained clean and pristine!

It’s funny how even some of our embarrassing incidents can become a blessing. You never know when you may make a new friend. Maybe all it takes is getting a little (or very) muddy!