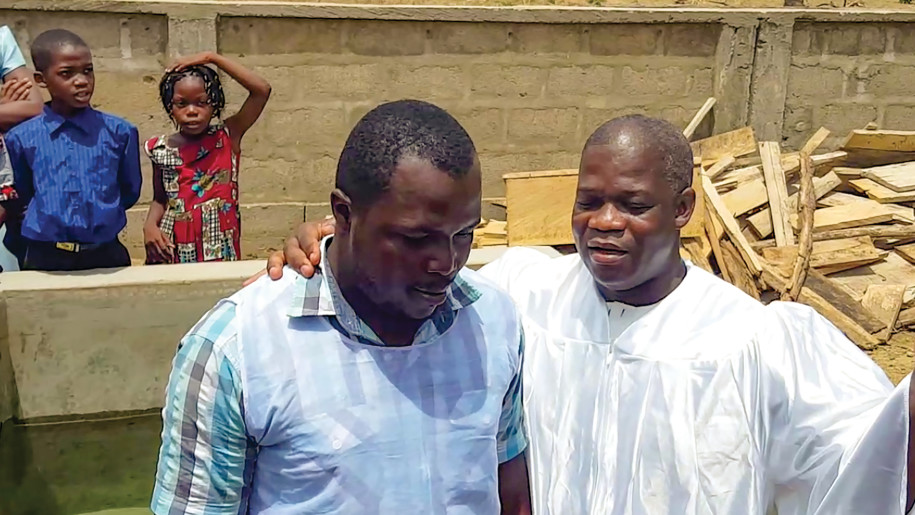 I believe that if mission begins with prayer and endures with faith, it is completed with patience. An attitude of patience and encouragement is a missionary’s capital. Patiently, AFM missionaries prepare for their work, enter the culture and worldview of their target people group and see God transform them. Changes can take years to become visible, and every day is a test of prayer and patience.

Lechami’s spiritual journey with us began in September 2009. Seven months earlier, we had returned from AFM’s Phase-Two Training (P2T). For most AFM missionaries, P2T comes after they have been in the field for a year or two studying the local language and culture. It marks the transition from learning to active evangelism.

Using insights from our P2T, we decided to open a computer center in Kandi as a base for evangelism and networking. Elmire was the manager, and in a few weeks the computer center became quite busy, averaging 30 customers a day. Because it was one of only two computer centers in town that offered color printing, and the only one that provided students with assistance in their homework as well as word-processing services in Arabic, it soon became the most popular in town.

One day Lechami stepped into our computer center looking for a way to produce better-quality labels for the fruit drinks he bottled and sold. Satisfied with the service, Lechami became a faithful customer. He asked Elmire about our mission and commented that he would like to talk with me about religious issues.

Elmire invited Lechami to our family worship one Sabbath. Talking with him, I was impressed by his interest in spiritual matters. It was evident that he had been exposed to a number of different Christian communities. But we were focusing all our energies on Dendi outreach at the time, and Lechami was not Dendi, so I put our relationship on the back burner. But Lechami became close to our family and was in our prayers. He was the type of person on whom you can rely. He was always on time and went the extra mile in accomplishing tasks.

Two years later, after the conversion of three precious Dendi souls, we began broadening our ministry focus to include other people groups in the area. By that time, Lechami had moved out of town and was preparing to leave the country. But our family never forgot him. Last year, after about five years of absence, Lechami returned to Kandi. We were glad when he visited us at home. We invited him to pray and worship with us at our Faith Dialogue Center. We were glad to tell him that our little house church had become a church of more than 50 members, and that we are about to complete a church building that can seat more than 200 people. But Lechami’s spiritual interest seemed to have waned. We later learned that he had suffered a major financial setback in a failed plan to immigrate to Europe.

We did not hear from Lechami again until this January when he came by to wish us a happy New Year. To our surprise and joy, he also announced that he would be visiting our church family that Sabbath. Since then, Lechami has not missed a single meeting. After only two months with us, he was leading the morning and evening prayers. Most of the time, he and his four-year-old son are the first to arrive. He attends lay-worker trainings and has asked to be informed about any training program being organized by the church, even in other towns. In April he indicated that he wanted to become an official member of the church. He was initially planning on entering by profession of faith, but changed his mind during the baptismal classes. By the grace of God, Lechami, along with three other candidates, was baptized on May 7, 2016. His wife, who is expecting their second child, now comes to church as well.

In mission for God, some will be church planters like Paul, others will nurture new converts like Apollos, but I have been blessed to be a part of both of these phases with Lechami. Praise God! Thank you for your prayers all these years. Lechami is not only an answer to our prayer, but to your prayers as well. Please remember his wife in your prayers. And please pray for us as we complete the Dendi Project and begin to transfer it to the local SDA mission in January 2017.