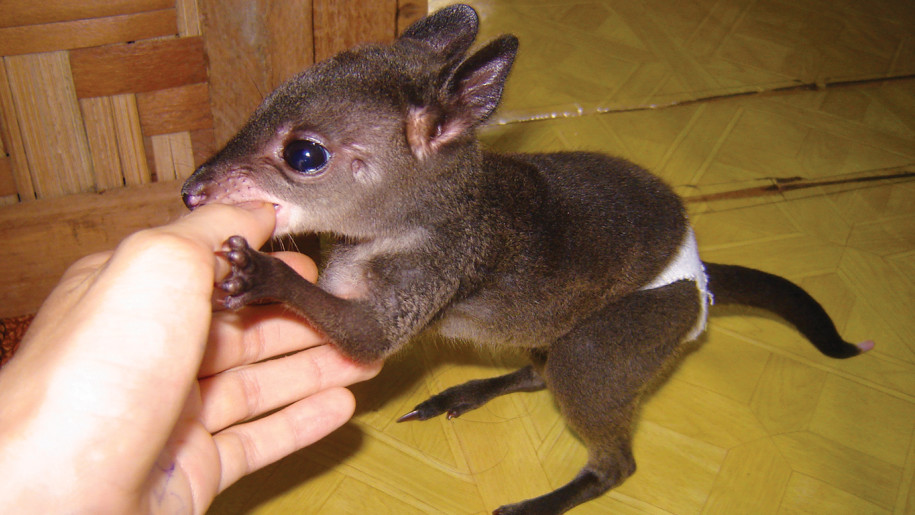 Hi! My name is Jojo, and I’m a wallaby joey—a baby, something like a small kangaroo. I was in my mommy’s pouch happily growing up until one day my mommy was injured and died. A Gogodala man found me and took care of me until he met a missionary family visiting his village, Saweta. The missionaries had come to bring the village people mosquito nets to help them not get sick from malaria, a very bad disease that mosquitoes in my part of the world give to people. The man was so happy that he gave me as a gift of appreciation to the missionaries’ two young daughters, Karin and Johanna. Boy, was I in for some major changes and experiences in my life!

The girls took me to the house where they lived and took care of me. They put a round metal object up to my mouth. They called it a “spoon,” and it had milk in it. I tried to get used to the taste, but it was different from my mommy’s milk. Then they placed me in a woven bag, called a bilum. It felt so comfortable! It was almost as if I were back in my mommy’s pouch. They hung the bag on their bedroom door where I went to sleep for the night.

The next day the missionary girls carried me down to the river with them and climbed into a small open boat. They told me that they were taking me to their home village of Kotale. A crowd of people watched us leave, waving to us as we pulled away from the riverbank. I was scared as we raced along the river in the skinny boat, but Karin and Johanna took turns holding me and comforting me.

Arriving at my new home, I quickly learned the routine of the missionaries. Karin and Johanna were so nice. They gave me milk to drink and cleaned up my messes. I hopped around the house following them wherever they went. I also watched as the missionary lady took care of sick or injured people that came to her home for help.

I enjoyed my new life. But it seemed strange to be the only furry one around. Then one day the missionary girls walked in the door carrying two small furry creatures. They didn’t hop on their hind legs like I do. They had long whiskers coming out of their cheeks and they said, “Meow, meow!” They are strange little wallabies, I thought. But the missionaries called them “kittens.” Soon, the kittens were playing with me, and I forgot that they were different than me. They had lost their mommy just like I did, so I decided to be their mommy. I tried to lick their fur like my mom did to me, but they squirmed and wiggled so much that I had to hold them tightly with my two little front feet. Since they were so young, the girls fed them milk from a bottle. All day and night the missionary girls were very busy taking care of their three furry babies.