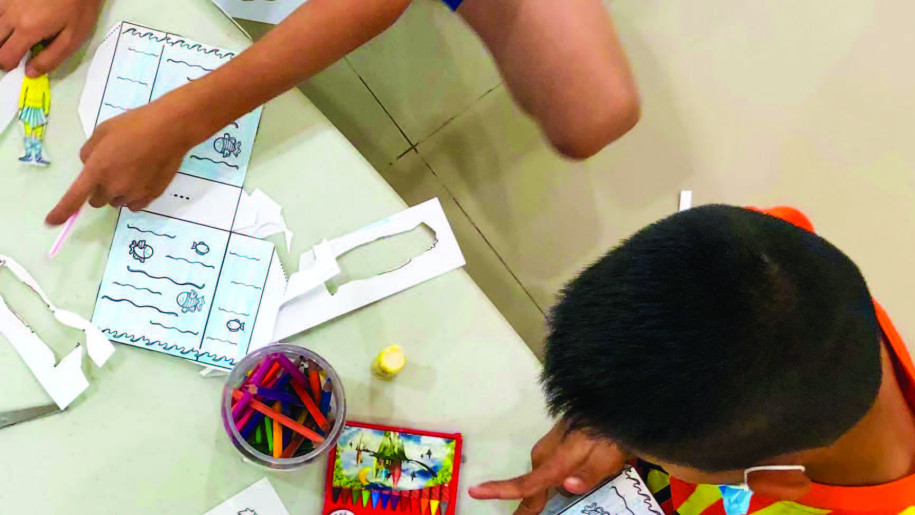 As I followed Teacher Ming and Teacher Tan into the kindergarten classroom where we teach English every Monday morning, I immediately realized that the students had been left unsupervised again. Their teacher had not yet arrived for the day, and this large group of five-year-olds had been there for more than 30 minutes. The girls were drawing pictures and talking loudly with each other, and the boys were jumping on each other, wrestling on the floor, and hitting and kicking each other. Teacher Ming asked all the students to come sit in a circle for story time.

When their teacher is there, the students usually gather around quickly for the story, but on this day I had to help guide most of the students to the circle. A few boys kept getting up and running around the room. Finally, everyone was settled, and Teacher Ming started reading a book about bunny rabbits and their long ears.

A boy named Ice was sitting at the back of the group. When Teacher Ming started to read, he slowly scooted himself backwards across the floor until he was inside the little playhouse at the back of the room. Teacher Ming stopped and asked him to come out, and he did. Then, after a moment, he slowly crawled under a bench along one side of the room. Again, Teacher Ming stopped and called him to come and join the group. This time, I sat down with him and gently pulled him back to the group each time he inched away.

When Teacher Ming finished reading, it was my turn to teach English. I held up a large picture of a sunflower, but before I could say a word, Ice stood up and kicked the student sitting next to him. I walked around the circle and took Ice’s hand, bringing him to sit next to me. But as soon as I let go of his hand, he got up and ran back around the group, hitting several students. I got up again and walked Ice back to sit next to me, but this time I did not let go of his hand. He started pulling against me. I realized that I would not be able to teach with him in the room. I stood up and started walking out of the room with him, and he immediately went limp from head to toe. So, I gently lifted him up. Then he started flailing his hands and feet as I carried him out of the room.

The teacher from the next-door classroom heard the commotion and came out of her room. She immediately started yelling at Ice. Then she raised her hand up like she was going to hit him. Ice kicked towards her again and again. After about a minute, she left and went to yell at the other kindergartners still in the room. I held Ice while he kicked the air again and again. Several times, I asked him to sit down. Finally, he sat on a stool outside the classroom. I squatted down and looked into his eyes. “Ice, I am trying to help you. I love you. I want to teach you and the other students. But I can’t teach when you kick and hit.”

Before this, it seemed like all he wanted to do was fight and show he was stronger than me. But as I talked, his whole body relaxed. He looked down at the ground. I asked if he could sit there while I taught the other students. He nodded his head.

I went back into the classroom and taught the rest of the students who were now sitting quietly. When I was done, Ice came back into the room. I put my hand on his shoulder and spoke to him again. “I love you.”

He did not look at me, but he got his handwriting book out and started working. Teacher Tan told the teacher next door we had to leave because we had to teach at another school in a few minutes. The teacher came into the room to take charge of the students, but it was difficult for me to leave them. I knew the other teacher would leave the students alone again as soon as we left the campus.

The students we work with are often neglected, both at home and at school. They are desperate for attention and love. This deep need usually leads to negative behavior because they just want to know that they matter. We do our best and take every opportunity to let the students know that we see past their behavior and that we love them.