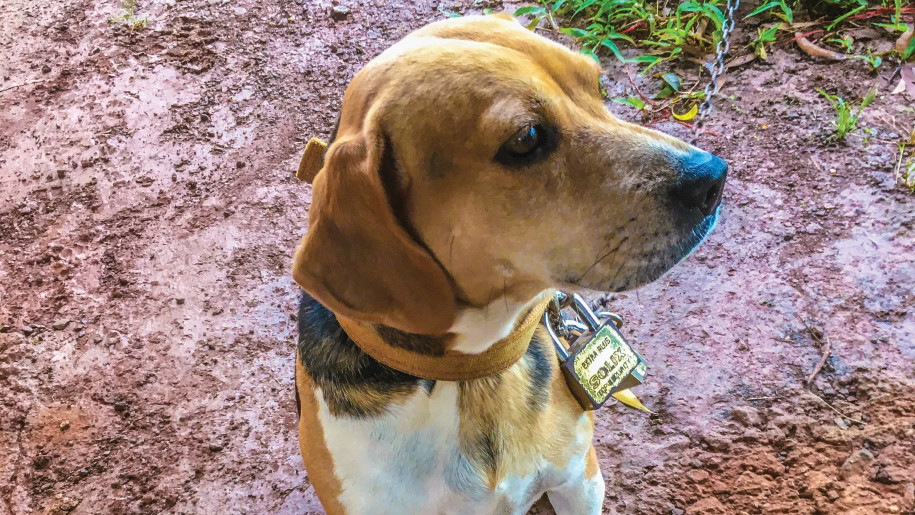 You know I can’t do this, God! Why is this happening? I slowly stopped running, put my hands on my knees, and paused my frantic search for a brief moment.

I had been in Mondulkiri for only a week and was staying at the Greenfields’ home. One morning, having been asked to help take care of the Greenfield’s dog Cutie, I put on my flip flops and went to let Cutie out and put her on the line so she could spend some time in the great outdoors. Before putting on her leash, I expected to be met with some eager tail wagging and inquisitive sniffing. Instead, as soon as I opened the door, Cutie decided to dash toward the back fence. Oh, that’s so adorable. She’s so happy to be outside, I thought as I smiled and watched her run. My blissful naivety only lasted a moment until I realized that Cutie knew exactly how to escape from the fence. I called her name a few times in hopes that she would stop, but to no avail. Within only a few seconds, Cutie was gone.

Frantic at the thought of losing the Greenfields’ dog, I dashed to the front gate, threw it open and ran around the fence toward where I had seen Cutie escape. I looked around and called Cutie’s name several times. She did not respond to my calls, nor was she anywhere to be seen. I thought it might be a good idea to ask the family who lived behind the Greenfields’ home if they had seen a dog running by. Surely someone over there could at least tell me which direction Cutie had gone.

Arriving at the home a few moments later, I quickly realized that I had no idea how to explain the problem in Khmer. Deciding to try to explain in the best way I knew how, I wildly motioned to the man standing in front of the home, made running actions with my legs and arms, barked like a dog a few times, and looked questioningly at him to see if he comprehended the predicament or had at least seen a dog in recent history. After giving me a blank stare, he called into the house, and someone came out who spoke English. The English speaker, however, wasn’t able to provide any help, so I continued running down the road next to the neighbor’s home to look for Cutie.

After running down the road for about five minutes, I turned back toward the Greenfields’ home and slowed my stride while my thoughts fired at a rapid pace. You know I can’t do this, God! Why is this happening? The Greenfields aren’t here right now to help. I just got here. I don’t speak the language. I don’t know the neighborhood and might get lost if I explore too much. I have no bike and can’t drive a moto yet to be able to search more quickly. The Greenfield kids are going to sob for weeks. I can’t do this. It’s all my fault!

After a few moments of thought, I realized that I hadn’t yet prayed for Cutie’s safe return. I stopped walking, put my hands on my knees, and desperately prayed for God to bring Cutie back or help me find her somewhere in the neighborhood.

Once I finished praying, I jogged back to the house and prepared for a longer search by properly locking up the house and switching to tennis shoes. I remembered Daniel telling me about a nearby resort that Cutie ran to on occasion, so I planned to go there first. I once again left the Greenfields’ through the front gate. After locking the gate and turning back toward the road, I was struck by an unexpected sight. Cutie, with a silly beagle smile on her face and her tongue dangling, ran right up to me, looked at me for a second, and then went up to the gate, ready to go in. She was back, and of her own accord! Without losing any time, I grabbed her collar, walked her back onto the Greenfields’ property, and put her on the line as I had originally intended.

With Cutie finally secure on the line, I went inside the Greenfields’ home and marveled at what had just taken place. God had brought Cutie back to the gate. I had been distraught with worry, unable to do anything. What could have been an awful situation turned into a reminder for me that God is always in control, and I need to rely on Him.
Being in the mission field is a constant exercise in relying on God for everything. If God can take care of returning a lost little beagle, how much more can He take care of your needs and make up for your lack of knowledge or skills? He is in control. Will you choose to rely on Him today?