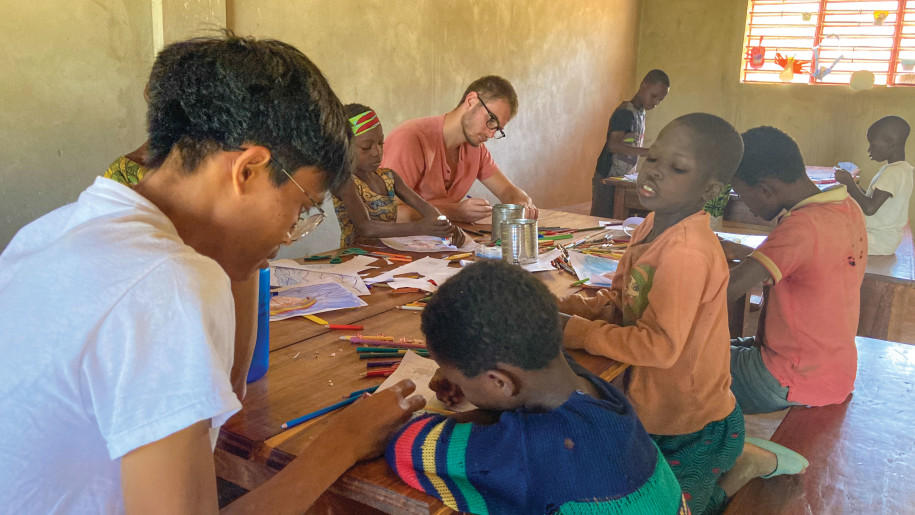 It was Christmas Eve morning, and the missionary house was already abuzz. Marcus had been up early sweeping the floors and wiping down dusty tables. I had been up late the previous night feverishly cutting colored construction paper. Daniel had been out on the porch for long hours lashing together a wooden structure large enough to carry some hay and a small baby. After a solid week of preparation and prayer, our Christmas Vacation Bible School program was ready to kick off.

Our career missionary, Ulrike Baur-Kouato, and her husband Toussaint run a lunch program on their property here in Natitingou. Children from around the neighborhood stop by during their school lunch break for a hearty meal. But Christmas break had finally come, and the kids were out of school for the next week and a half. In light of the Christmas season, we thought the vacation break could be a great opportunity to bring them the story of Christ’s birth through storytelling, skits, songs and crafts.

However, we did not want to just stop at the birth scene. Many of the children in the neighborhood had grown up going to Sunday churches and were already familiar with the birth of Jesus. The manger, the Virgin Mary, the angels, the wise men—they knew them pretty well. So we decided for the five days we had with the children, we would showcase Christ’s life, ministry, death and resurrection.

The first day, nearly 20 kids showed up, bursting with enthusiasm. Huddled together on the cold, dusty floor of our empty storage room, they listened intently as Uli narrated the story of Jesus’ birth. Some of the older ones who knew the story were quick to comment. But most of the kids just sat there, completely enthralled.

After Uli finished telling the story, it was time for the skit. But instead of us missionaries putting on the skit, we had the kids do the skit for us! Uli and Marcus assigned roles, and the kids went off to rehearse their parts. Ten minutes later, they returned, eager to perform what they had practiced. We were amazed to see how invested some of them were in their roles and how much of the story they had memorized in a short amount of time. It was a blast, and everyone shared a ton of laughs.

The children reenacted many memorable scenes from the life of Jesus. On the first day, there was a touching moment at the end of the skit when Mary, Joseph, the wise men and the shepherds gathered around the manger to pray over baby Jesus. On the second day, the kids had a mini feast as they reenacted the story of Jesus feeding the five thousand. We prepared small pieces of bread and fish for Jesus and His disciples to hand out to the audience, who played the multitude. On the third day, the kids were in for a wet surprise. We were reenacting the story of Jesus calming the winds and the sea. When Uli called, “Action!” Daniel came out with a spray bottle and started to dowse the kids! It was chaos in the boat. Kids were screaming and yelling, trying to shield themselves from the water. Only when the child playing Jesus lifted up his hand and said, “Peace, be still,” did the water spray finally stop. It sure made the experience more real!

On the fourth day, instead of a skit, we watched a movie of Jesus’ death on the cross translated into the local language, Waama. They watched as Jesus was betrayed by His disciples, beaten by soldiers and nailed to a cross to die. One can imagine the thoughts going through each child’s mind as they watched their beloved hero die a humiliating death.

On our final day, we concluded with Jesus’ triumphant resurrection from the tomb and His ascension into heaven. The kids erupted into applause as the angel moved the stone away, and Jesus emerged from the tomb.

Our theme song for our VBS was the French version of the song “Lord, I Lift Your Name on High.” We focused on the chorus, as it beautifully summarizes Christ’s life and mission on Earth. Even now, a month after the program, we still hear kids singing this song:

Tu viens du ciel sur la terre
(You came from heaven to earth)
Montrer la voie
(To show the way)
De la terre á la croix
(From the earth to the cross)
Payer pour moi
(My debt to pay)
De la Croix jusqu’au tombeau
(From the cross to the grave)
Et du tombeau jusqu’au ciel
(From the grave to the sky)
Je loue ton nom, Éternel.
(Lord I Lift Your Name on High.)

It was our prayer that the VBS program not only serve as a fun Christmas-break event, but as a steppingstone towards building a relationship with Jesus. Many children in Benin grow up in animist homes where appeasing ancestral spirits through prayer and rituals is common practice. Even in the many families that have converted to Christianity, God is commonly viewed as a distant being who requires constant appeasing in order to get what they want. These views are passed down to the children and rob them of the loving relationship Christ wants to have with them. Please pray that, through the ministry of Uli and Toussaint, the children of Natitingou would come to know the one and only true Christ and decide to follow Him.