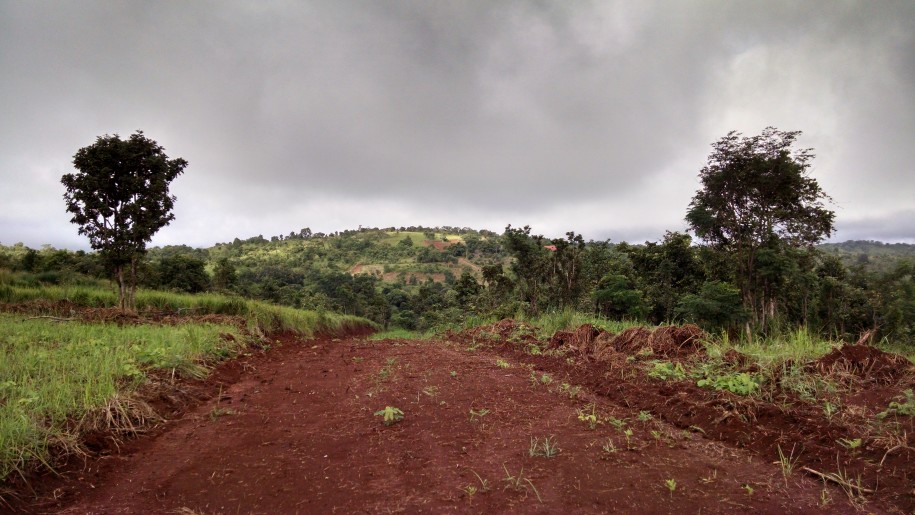 “So—aside from malaria-ridden mosquitoes— are there any dangerous creatures I should watch out for while I am over there?” I warily asked the travel nurse.

I must not have been too concerned because I didn’t bother to remember her guidance regarding this topic. All I know is that I have been thoroughly astonished and amused by the various animals I’ve encountered so far. I figured I was going to a place where the wild things are, but research, pictures, and children’s books can only prepare one so much for the creatures of another kingdom. Sometimes it just takes running up the red mud roads of Cambodia, only to startle a bull and his cows during their feeding time to find out what is really out there. So let’s take a tour of this unruly zoo I’ve found myself in.

Upon entering Cambodia, the first creature I encountered was a strayish looking cat scampering along a fence out by the airport exit. Not too long after that, a dog scurried across the dimly lit road in front of us. After numerous occurrences like this, it didn’t take long for me to realize that I must be in dog country.

Sure, there are dogs in other countries, but these dogs seem different. Down every street, nook, and cranny, right up to the driveway of our house, dogs are lying around, scavenging for food, wrestling with each other, and, not to mention, barking and nipping at the heels of two American English teachers whenever they happen to run by. One pale dog we see everyday on our way back and forth from school skips around askew with a curved back, one floppy ear, and a stiff leg that appears to be broken, drawing the sympathy of all who see him (and by that I just mean Anthony and I; the locals don’t seem to mind).

Unfortunately, they are not the only creatures to be neglected in this country. Many dogs appear malnourished and flea—or who knows what else—ridden. Some dogs are even eaten by a certain ethnic group (yeah, you know who I’m talking about).

Anyways, these dogs are often found in scenes that would normally provoke sympathy; such as a litter of puppies carelessly crawling over each other. But other scenes bring out a profound disturbance and compulsion to hurl. For instance, the most disturbing scene of all is not concealed in privacy. Rather, scarring the memory of all who see it, it is performed publicly without shame or restraint: an unseemly activity meant to initiate the process of reproduction (which explains the mass occurrence of prenatal dogs and their unrelenting multiplication).

Okay, let’s move on to observe some other (less nauseating) creatures. What about the exotic mammals roaming the hills of Mondulkiri (and no, not the falsely stereotyped hilltribe people rumored to have tails, the other, actual nonhuman beings)?

In my occasional ventures out of the city I’ve been blessed to see water buffalos grazing in rice fields, monkeys on leashes, arm-sized geckos climbing on our bedroom walls, and hogs, one of which, on one occasion, decided Anthony and I were a threat to her piglets and proceeded to charge us as we passed through the rural fields; I must admit they are quite cute scurrying around with their little piglets making their little piglet sounds as they assail their mother for milk. I could sit and watch these animals (at a safe distance of course) for quite some time, admiring their complexity in light of God’s ingenuity. Some creatures, however, do not require us to even leave our house to be encountered.

Upon moving into our career missionaries house we were informed that some wild life are not restricted by walls. Rats are free to come and go; one of which had already come and gone in a different sense as it fell victim to a fatal substance that’s attraction nearly equals its fatality. As mentioned previously, geckos also slink their way into the house leaving traces of gecko fecal matter in their wake. We’ve also been playing hide and seek with an ill-mannered beetle in our bathroom for a few weeks too, till I finally grabbed the manliest tissue paper I could find, seized the beetle, and propelled him homeland.

Unfortunately, that beetle was probably better off inside, for around the perimeter of the house lurk even more inhospitable beings. The other day I saw a shiny little tail poking out of a hole in a brick. I probingly pointed it out to Anthony and moved my hand closer for clarity (wrong move). He steadily cautioned me that it could be a pit viper. Pit vipers dwell in burrows and slither by, concealed under unruly greenery; and to startle one would be fatal (for the startler). I pulled my hand back assuring him that it’s okay because it’s probably only a baby, in which case he kindly informed me that the consequences of startling a baby would be exponentially worse. Then, before I had time to react, the little reptile poked its anterior end out to reveal— that it was only a ribbing little lizard (Whew!).

Similar to an experience in a zoo, each encounter with a new organism is a real treat from the Creator. The psalmist puts it his way: “How many are your works, Lord! In wisdom you made them all; the earth is full of your creatures.” (Ps 104:24). Sometimes, though, we don’t have to venture out into the unknown to experience God’s ingenious blessings in nature. See, while these exotic animals may pique the interest of many, there is one pair of animals that often go unseen. They are, no doubt, the strangest creatures in all of Cambodia. Some might even go as far to say they are the strangest creatures in the whole world…when you can find them.

“Where’d Toby and Cutie go?” I asked Anthony in the sudden stillness of our surroundings.

Toby and Cutie are the agreeable responsibility of Anthony and I while we occupy our career missionaries house. Cutie is a polite little female beagle full of energy and … well … puppies. The other is a droopy-eyed, loopy bagle hound (also known as a basset hound beagle mix) who compels all sensible minds to respond to him with a mix of adoration and admonition. It is hard to find the words to describe the phenomenon that occurs in one’s mind upon gazing into the sagging, and seemingly mindless face of this sad-looking basset hound. He can be a nonsensical ball of trouble, eating Cutie’s food, peeing on our moto, barking like there’s no tomorrow (or lamenting because he knows there is one), and delaying to respond to our commands like “sit” or “come.” In this case, neither dog responded to the latter.

We had just returned from school and let the dogs out to sniff around for a few minutes before putting them on their runners. Instead of watching them, I went inside to set down my bags before hooking them up. When Anthony and I suddenly heard nothing, we nonchalantly stepped outside to call the dogs to their leashes, but there was no response. We called again. Still no response. After praying, we ran around the overgrown yard, corner to corner, calling their names until we decided to expand our search.

After searching up and down the road, Anthony ventured into the field of mysteriously tall grass along the other side of our fence with a stick to protect himself from pit vipers. I took the moto up the road parallel to the field past our good-natured landlord’s house and her viciously barking dogs. I called for Toby and Cutie in an inviting way that they might return joyously into my arms, rather than in a rebuking way that would simply provoke resistance and outright rebellion.

I called one last time in faith and desperation about to turn around. No sooner had their names left my mouth then they came running to me as if to say, “Oh boy! We are so glad you decided to join us on our adventure!” In a mix of joy and irritation I dropped the moto, scooped the two little absconders into each arm, and began the march home.

Hoping they would understand, I explained to Cutie and Toby how worried and upset we were that they ran off, but that we were sure glad they came back. Perhaps the message sent by a lack of scolding triggered a perception of grace and a response of repentance. Either way, they haven’t run off again, and we sure haven’t given them the chance.

Since then we have decided to give them more attention by taking them on walks, which turn into sporadic runs uphill because for some reason they don’t like running downhill as is more preferred by the two-legged beings such as myself. We shovel their excrement, scrub the floor of their house, feed them, pet them, bathe them, give them treats, talk to them, give them water, and feed them some more. Yes, they may sound like a chore, and Toby can be unrestrainedly ditsy, but we still love them.

I cannot imagine that the travel nurse’s advice would have prepared me for my engagements with these strange beasts simply because what I have encountered is extraordinary and unpredictable; something so outrageously different from everything else that should already seem strange to a foreigner in a foreign land; and what a blessing! Sometimes God’s biggest blessings go unseen, and thus unappreciated, and sometimes they even go missing, but when we find them, there is a new found appreciation. Wagging tails and eager looks of innocence do something beautiful (and ironically paradoxical) in relieving a day’s burdens; and who knows, these crazy dogs may be preserving my sanity.

Bezi, I enjoyed your blog!  Thank you for the delightful descriptions of ‘your zoo’.  Better you than me I can say with confidence!  I struggle with some of the ‘zoo’ creatures we have here in the known world.  Love you!  Auntie

Loved reading about your interesting creature encounters, Bezi. However, those pit vipers sound frightening! Please be careful! Sounds like you are learning a lot from your lovable canine companions. They can be challenging but their love and devotion are so worth it. Great stress relievers! Enjoy! Love and prayers as always.

Bezi, your Uncle Gary and I are really enjoying your blogs.  You have a very unique way of writing.  It makes for interesting reading.  Please watch out very carefully for those pit vipers!  We are continuing to pray for you and your missionary endeavors, also your safety.
Love you lots,
Auntie Virginia

Bezi, how can I talk to you? Do you have an email?

God stay with you and bless you wherever you go!

Maiara (email: .(JavaScript must be enabled to view this email address))