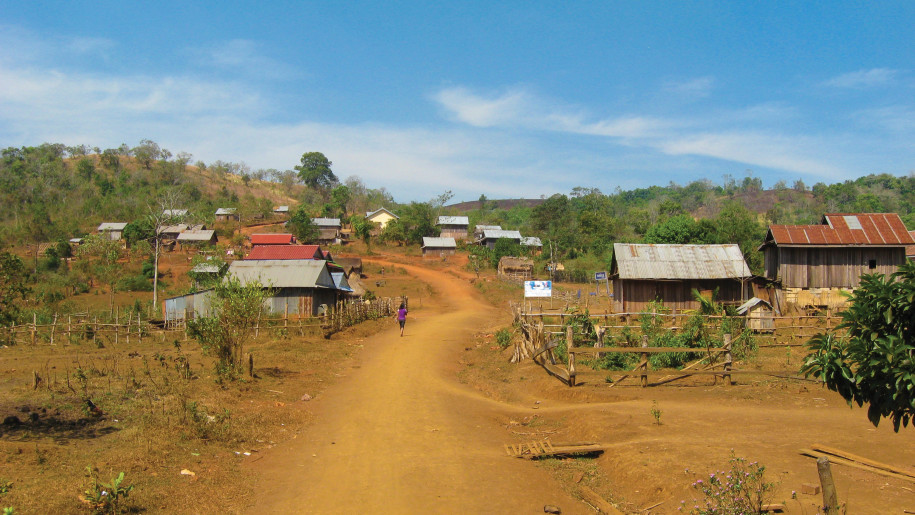 My expectations for Ary were low the morning of her Bible test. But she had a surprise in store for me.

Ary and her husband Heng had come a long way over the four months since I had arrived in their village as a student missionary. When I first met them, their property and bodies were decorated with animist amulets meant to appease local spirits and lesser deities. At every major life event—births, marriages and deaths—they offered animal sacrifices to the spirit realm.

However, Ary and Heng had heard about Jesus and His power over illness and spirits. Just two weeks after I arrived, they took a leap of faith, choosing to trust in God instead of in the spirits they had served for so long. We gathered at their house for a spiritual cleansing ceremony. Other members of our faith community helped Heng remove all the fetishes and amulets. Ary assisted as we cut the strings of protection off of her, Heng and their two young children. In that moment, they were not only removing the blessing of the local spirits, but they were leaving themselves open to attack. So, we prayed over them and their house and anointed the four pillars of their home with oil as a symbol of the blessing and protection Jesus provides.

Though Heng and Ary were committed to the path of discipleship, they knew less than most Adventist first graders about the stories of the Bible and even who Jesus is and why He came to die for our sins. This became apparent one morning when Heng asked nonchalantly why Jesus had died on a cross. He hadn’t even heard the full gospel story!

To remedy this lack of knowledge and teach them what it means to be a disciple of Jesus, Makara (my Bible worker partner and translator) and I began meeting with them daily. We would ride our moto down the village’s main dirt road and park in front of Ary and Heng’s little home that doubles as their shop. Ducking under the snacks and supplies hanging from the ceiling, we would make our way to the back where they live. Their house-shop is quite cozy with wood-slat floors that have gaps just wide enough to give the mosquitoes access to my ankles. Our studies were often punctuated by friends and neighbors stopping in to buy snacks or gas. However, distractions aside, they were always ready to learn, especially Ary.

We began at Genesis 1:1 and studied through both creation stories, then the fall, then Cain and Abel. We even studied through the first genealogy. Finally, we ended our first section in Genesis 6:8. Studying through these stories had taken us several months, but I decided to dive deeper with them and prepared some teachings on the significant themes found in these first chapters. Ary and Heng tracked right along with me. Eventually, the day came when it was time for their test. Heng had to work in the forest that morning, so it was just Ary attending. We had told her that her task was to retell these foundational stories in the correct order and with as much detail as possible. We had given her three days to prepare.

After Makara and I arrived and met with Ary, we went through our usual routine, singing Khmer hymns and praying about our needs and thanksgivings. Then I told Ary that she could begin telling the stories when she was ready. I didn’t expect her to do very well. She and Heng had often struggled to get the stories straight, even just seconds after hearing them.

Ary asked that I avert my eyes, because she felt nervous and was afraid she would giggle. I was happy to oblige, and I stared at the floor as she began. She quoted Genesis 1:1 verbatim, and then kept on going! She had memorized most of the first creation story! As she continued, I realized that she had also memorized significant portions of Genesis 2-6!

It was at that moment that I saw the fruit of my labors ripening before my eyes. Ary truly knew these stories. In fact, she knew them better than many Christians do 40 or 50 years into their faith journeys. She was prepared to share these stories and her personal faith with anyone she met. Obviously, I lavished praise on her and told her that she was living the life of a faithful disciple to Jesus. But the story didn’t end there.

Ary shared with us that the night after we had told her about her test, she’d had a dream. In her dream, she had told the stories just like she had that morning. But, once she finished, Makara tried to hand her 3,000,000 riel ($750) as a reward. In her dream she refused to take the money and insisted that it was simply for the sake of the Scriptures themselves that she was learning. When she awoke, she felt the Spirit urging her to dive deeper into the stories and to memorize them. Over the next two days, she listened to the MP3 stories over and over and recited them to herself as she cooked and cleaned and ran her little store.

Daily when I awake in the morning and begin my study of the Scriptures, I recite a blessing that is for myself and my descendants, that we would love studying the instructions of God for their own sake. I don’t have literal descendants yet, but I saw God answering my prayers in a powerful way that morning among my spiritual descendants. I rejoiced and continue to rejoice that Ary would be so led by the Spirit of God and that I can be a part of her journey as a disciple of our Master Jesus. As she continues to grow and learn to be a representative of God, Ary will be a light for the Kingdom among the Pnong. May we all live likewise!