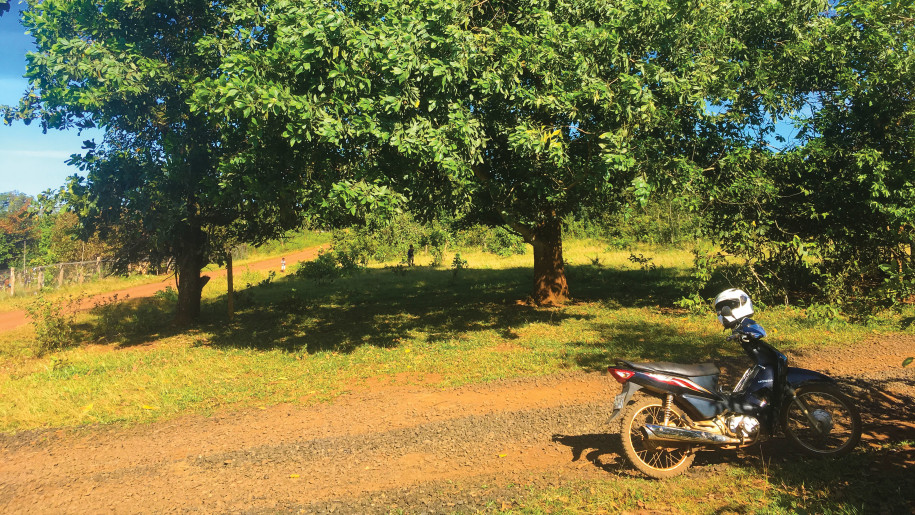 I’m not dead! I thought as I parked the motorbike and took off my helmet. My whole body was shaking with adrenalin. Never had I thought that one short drive around the school flagpole would be such a terrifying experience!

I like to be extraordinarily safe. I’m not fond of crazy adventures or risking my life for thrills. But when I was preparing to serve as a short-term missionary in Cambodia where motorbikes are the primary mode of transportation, I decided that it was probably time to learn to ride a bicycle. When I successfully completed that task shortly before my launch, I thought that learning to drive a moto wouldn’t be too bad.

At the Pnong Project, after that first scary experience driving a moto around the school flagpole, I was told that the next step would be to practice driving on the dirt road next to the Greenfields’ home where I was living at the time. This road was short and only had a few other houses along it, so it had almost no traffic. I’ve never seen such deep pits and large holes in a road before! I thought as I gazed down it. Forty-five minutes later, I had driven the one-kilometer length of the road and returned, again shaking with fear. How would I ever learn to drive this horrid beast of a machine? I prayed that God would somehow teach me how to drive.

The experience of going out to practice, performing horribly, and coming home shaking repeated itself two more times. Before the third practice session, I prayed with Daniel Greenfield about the issue. The encouragement was great, but it didn’t stop the shaking and fear of my life ending on a dirt road while driving at walking speed.

As I prepared to go out the fourth time, I prayed again. This time, I decided to drive on a different, larger road. I had been driving for a few minutes when I suddenly realized that all of the fear I had been feeling was gone. There was no trace of it! I drove more in my fourth practice session than I had in all of my previous ones, and there was no fear! God had taken it all away.

Although my fear was gone, I wasn’t suddenly driving like a professional. I learned a lot about driving a moto over the course of the year, and once I even crashed right in front of the AFM field directors. But God watched over me, and I never had a serious injury. Seeing God work in such a personal way at the beginning of my year in Cambodia gave me strength for the trials to come during the rest of my time there.