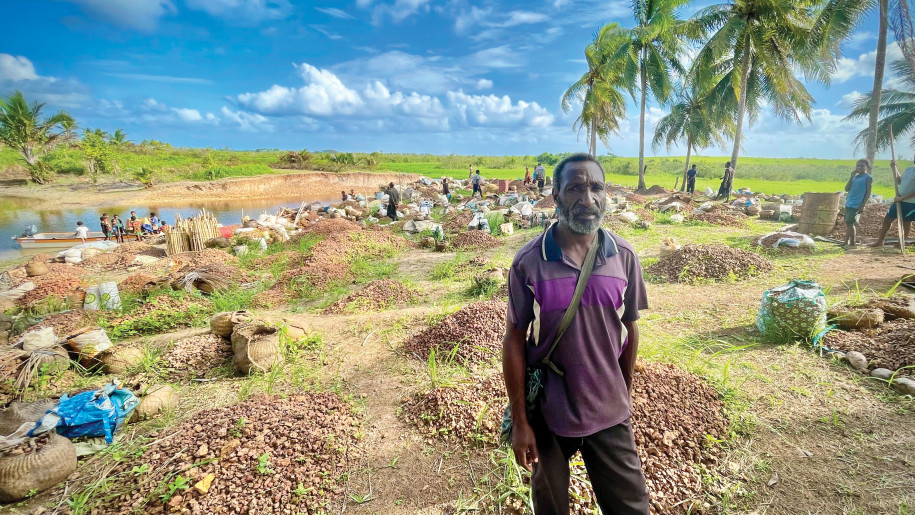 “No, I want to give my whole village the opportunity to be involved and to earn money so they can purchase metal roofing for their houses and their own water tanks,” said Alphie. Local parliament member (MP) Roy Biyama had just approached him with an offer of two million kina (about $570,000 U.S.) for Alphie and his family to supply gravel from their land for the airport project.

Alphie has been a member of our Kotale church for a long time. His father, Wolfie, was a pillar in our church before his death. When Wolfie passed, Alphie inherited some of his bushlands, and Roy Biyama visited him about upgrading the Balimo airstrip into a full-fledged airport. The project required the runway to be lengthened and paved with a fence around the perimeter. Western Province, the state where we live, is blessed with many natural resources, but a source of gravel is rare. Virtually all the soil is clay. Paving and concrete work requires gravel to be shipped in from other parts of PNG, making this work very expensive. But there are a few locations where the clay has hardened into small stones suitable for construction.

Roy had previously involved the locals of another village by paying them so much per measuring drum to mine the red gravel. The people loved it because it was a way to make money, and they felt valuable. But when conflict arose because of land disputes, Roy visited with Alphie, who took him out to his bushland, where red gravel was plentiful. This is how Alphie received the offer to supply gravel for the airport project.

Temptations to hoard riches for oneself appear everywhere, especially in financially poor societies like Kotale. Years ago, an oil company explored this region to decide on a parcel of land to erect an oil rig. I heard family members of the landowners say, “When we get our money, we will fly around the world and enjoy the good life.” But Alphie was different. He knew he was blessed by God so that he could be a blessing to others. He understood his responsibility — and the joy a generous spirit could bring to everyone, including himself.

On a recent visit to Kotale, I saw piles of red gravel beside the lagoon bank. The villagers had transported it from Alphie’s bushland so Roy’s barge could haul it away. Makeshift containers filled with the precious, ruddy material dotted the waterfront. They would soon give visitors to Balimo the “red carpet” welcome as their planes landed on the newly paved runway.

It was balm for my soul to hear Alphie tell his story. I am proud to be associated with this fellow church member. I pray that Alphie’s thoughtfulness will create ripples of influence that will extend to all the Gogodala people.