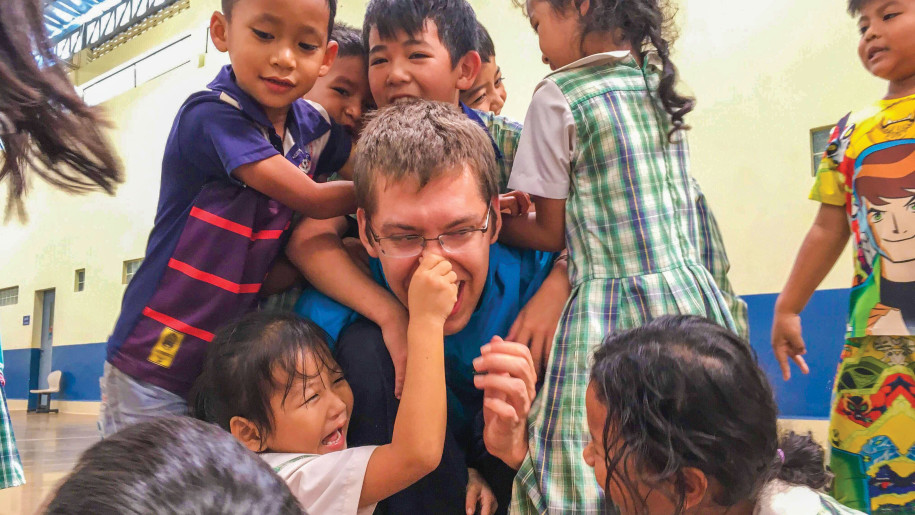 Ever wonder what difference a year of service as a student or short-term missionary can really make? Can you learn enough of the local language to bring anyone to Jesus? How effective can you really be? To answer these questions, let me share four stories about the ways our student missionaries have made an impact.

Story 1
The SM: Sarah Mann came to teach English in our village. Teaching English did not end up being her favorite thing, but she persisted.
The Situation: A young local girl, Anna, was engaged to a foreigner twice her age whom she had met only once. She wanted to learn English in order to communicate with her future husband, so she asked Sarah for English lessons. Sarah began to tutor Anna in English. When Sarah realized the implications of Anna’s situation, she warned her of the potential danger. Sex trafficking is a sad reality to which many local girls fall prey. After talking with Sarah, Anna called off the engagement. This angered her mother who would lose out on the money the man had promised to pay her. Later, the man had to leave the country because of his inappropriate behavior with several other girls.
The Difference: Anna was saved from a potentially miserable life, and she began reading her Bible. Seeds were planted that we pray will one day result in her full conversion.

Story 2
The SM: Miranda Lundby came to Cambodia to teach English and minister through friendship evangelism.

The Situation: A village requested English classes, but the career missionaries didn’t have time to take on the project. Miranda stepped up to the challenge and moved in with a local family so she could teach evening English classes in the village. As she lived among the people and practiced her language skills, she became friends with the villagers and engaged in deep spiritual conversations. Soon she was bringing her new friends to worship on Sabbaths.

The Difference: Several villagers became open to Christianity, and this village now has a group of believers worshipping every week.

The Situation: Our family had just moved to the Pnong Project. Our daughter Hannah was at the stage where she was making decisions about whether she wanted to follow Jesus personally. Sarah became close with Hannah and became someone she could confide in and share her spiritual questions. Hannah learned to trust Sarah and didn’t feel judged by her. Sarah always pointed Hannah to Jesus in a gentle and understanding way.

The Difference: At a key turning point in her life, a missionary kid embraced her personal relationship with Jesus and decided to be baptized.

Story 4
The STM: Michael Babienco, a professional computer programmer, came to the Pnong Project school to teach computer classes as a short-term missionary.

The Situation: When Michael arrived, he not only began teaching computer classes but also taught several English classes. However, we soon realized that he could make a huge contribution by coding registration and grading software. He took on the challenge and did an incredible job writing and tailoring software to the specific needs of the Pnong Project school.

The Difference: In addition to building wonderful relationships with his students, Michael used his coding skills to leave a legacy that the school will benefit from for years to come.

If you think that student and short-term missionaries don’t have much impact on those they serve, tell that to the girl who escaped a life in the sex industry, or the group of believers who find such joy in following Jesus, or the missionary kid who found a trustworthy friend who lifted up Jesus, or the school staff who now have a computer program designed for their needs. If you are considering serving as a student missionary, know that with Jesus you can make a world of difference!