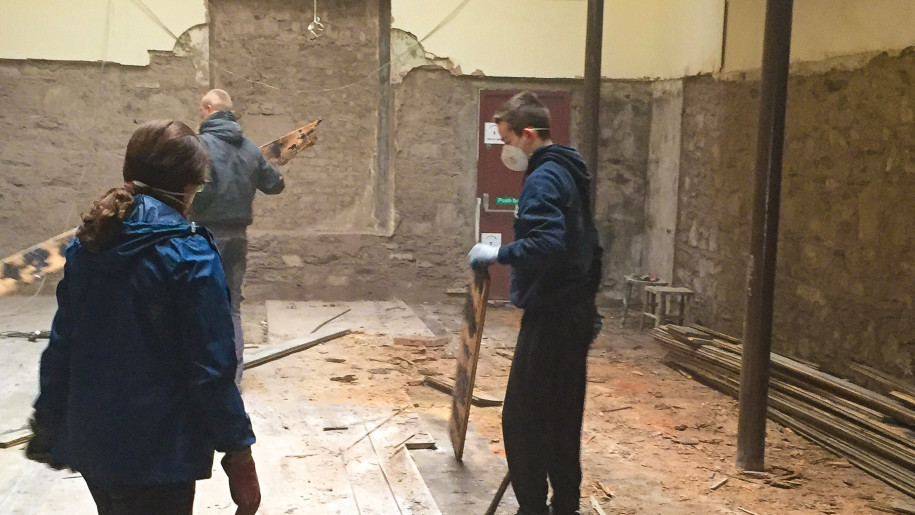 “I will be coming to your scripture study this evening. I feel I will get more from it than the meeting at my own church.” We were thrilled as Sean O’Brian shared this text message he had received. Graham and I were visiting the Irish Project in Cork and arrived in time to participate in the Friday evening scripture study group. It was such a blessing to see this Irish lady feeling so relaxed with the O’Brians and their interns and eagerly contributing to the discussion.

Earlier that afternoon we had visited an old Jewish synagogue that was recently purchased for the Cork Seventh-day Adventist church. It is in a central location in the city where a lot of people pass by on foot and in cars. This purchase made national news on TV and in some newspapers, as the closure of the synagogue brought to an end 135 years of Jewish history in Cork. The synagogue had been very exclusive, not allowing any non-Jews to participate or even enter the building. The membership dwindled to the point that it was no longer viable to keep the synagogue open.

Once the renovations and remodeling are complete, this building will be a place where all people are welcome. Already some public visitors have been taking a look inside the empty shell of the building. (The previous owners removed everything that would identify the building as a former synagogue.)

Our main reason for being in Cork was to attend the official farewell for Sean as the pastor of the Cork church and to express our appreciation for the diligent incarnational ministry of the O’Brian family. They have truly engaged wholeheartedly in sharing the love of Christ with the Irish people, as evidenced by the many local people who came to a surprise party for them the previous Sunday in the parish hall. “For more than seven years, Sean has served two bosses,” said Pastor David Neal, Irish Mission President. “Not only has he pastored the Cork church, training the members to reach out to their Irish neighbors and work colleagues, but he has also been serving the Irish people through Lighthouse Counseling and been accountable to AFM.”

It was a heartwarming and emotional event as members told of the many ways theO’Brian family had helped them in their spiritual journeys. One father expressed his gratitude for the interns who have assisted the O’Brians over the past few years and the good influence they had on his son. Some of the O’Brian’s Irish friends were also in church to share in this day. Graham and I had the privilege of concluding the program with prayers of blessing for the O’Brian family.

We are sad to see the O’Brians go, but we know there will be a rich harvest of Irish people from the seeds they have sown. They are leaving the work they have established in the capable hands of three interns who look forward to seeing the Holy Spirit continue to enrich the lives of their Irish friends. The Murphy family continues to grow their support team and hope to attend this summer’s AFM training and launch to Ireland by September. Having lived and worked on the Emerald Isle for two years, they are keen to get back to Ireland as soon as possible to reconnect with their old friends and make new ones for Christ. Is God calling you to be part of their team?