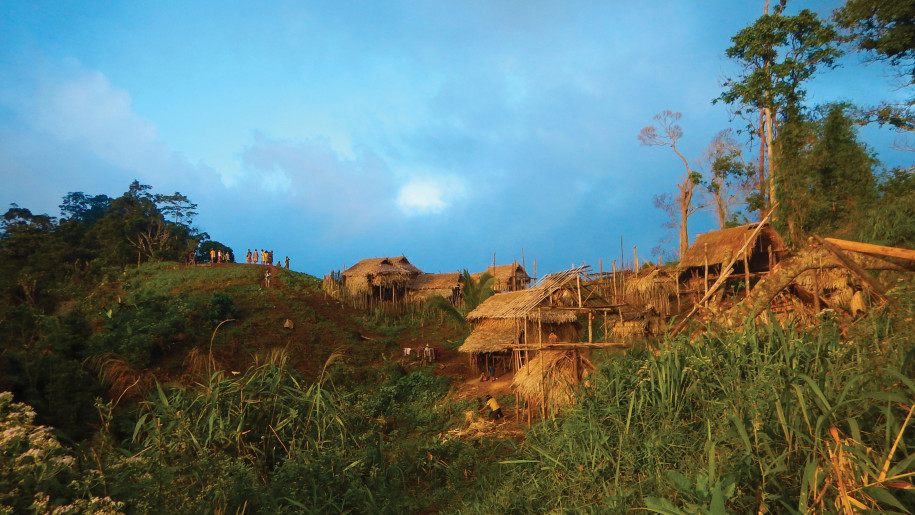 With excitement and some trepidation, our group of eight started hiking early Thursday morning. It was Christmas break, and we were heading out farther into the mountains for the next week. Our goal was to scout out some new territory, and my prayer was to find somewhere that was open and prepared by the Holy Spirit to hear the gospel. I was praying for God’s leading and direction since I had only a vague idea of the area. I was excited to see where God would lead.

Our group included two students, Kildit and Lisa, and Laressa, one of our nurses. Ruwina and her husband and two other guys were coming along to help carry supplies. We headed toward Emrang where we would meet up with a young man who would serve as our guide.

We reached Emrang around 2 p.m. and treated a few patients. Since it wasn’t too late yet, we decided to continue over the next ridge to a village I hadn’t visited before. As we topped the ridge and slipped and slid our way down the other side, I struggled with my footwear. It was rainy season, so I had worn my rain boots because they provide good traction in the mud. However, they are hard on my toes after a while. So I kept switching between my boots, my sandals, and just hiking in my socks. It was dark when we reached our destination that evening, and my socks were so torn up that I discarded them. That night a gracious family moved out so that we could sleep in their house. We cooked a big pot of rice and two packages of ramen, and then all found places on the bamboo floor and went to sleep.

The next morning Ruwina talked with people in the village about where we should go next. We could see villages to the west, but the rumor was that the people were not very friendly, and might even practice cannibalism. Though I strongly doubted the part about them cooking people, we finally decided to hike east instead. I was disappointed since it was in the direction of the lowlands.

The hiking that day was very intense, one of the hardest hikes I have ever done. The trail was very steep—literally straight up in some places. It felt kind of like rock climbing without the rocks. By mid-afternoon we were nearing a village called Meliya’ where people had told us we could spend the night. As we passed a farmhouse, I recognized Lisiya! She had been a patient of mine about six years ago. She had been suffering demonization, and her family had gotten scared of her and tried to strangle her while she was at the clinic. I had not seen her since that time, so I was excited to meet her again. She led us the rest of the way down to Meliya’ where we were warmly welcomed and given a house to stay in over Sabbath.

After taking much-needed showers and washing our clothes, we cooked dinner. Then we were able to have worship with our host and her family. We had brought a picture roll, and Ruwina told the story of creation. We met with them again on Sabbath morning and then did some visiting Sabbath afternoon.

I didn’t know where we would head from here because Meliya’ was only about an hour from the lowlands. I called Mrs. George, and she suggested that we head South. So, on Sunday morning after treating some patients, we hiked out to the lowlands. One of our team members picked us up and drove us about 40 minutes south to a river. From there, we started hiking back into the mountains. As we hiked up the river, we met a man who offered to take us to his house for the night. Since it was late afternoon already, we agreed. First he took us to another village where one of the local village leaders lived. As we talked with him, he expressed his desire for a mission school in their village. We learned that he was a relative of a man we know from Marma’, another village that has been eagerly waiting for a school. After treating some patients, we continued on to the next village where we would stay the night.

When we arrived, we were invited into a large open bamboo hut. We were able to shower at the river, and our host gave us cassava for dinner. We had worship with them, and our host promised us a guide for the next day who could take us to Marma’.

The hike to Marma’ on Monday was quite pleasant. We followed the river for several hours before heading up the mountain. After another hour or two of climbing we reached Marma’. The village of Marma’ asked for a teacher months ago, and we have not yet been able to send them one. They have already built a little school hut and made a landing spot for the helicopter.

We ended up spending the next two nights at Marma’. We had an eager audience who soaked up our Bible stories and enjoyed learning the songs we taught them. One evening after I finished telling the story of the flood, Ruwina said, “They still want to hear more, so I am going to tell them another story.” Ruwina was also determined that they would learn “I Have Decided to Follow Jesus,” so we sang that song many times. Although they were too shy to sing very loud, we could tell some of them were learning it. The next afternoon I treated the first wave of patients. Then, after a long story and song time, we girls climbed carefully up into the rickety loft that we hoped would hold us as we slept that night. Although the house swayed every time one of us moved, thankfully the loft held!

The next day was spent with the people in Marma’, treating the second wave of patients and hosting another story and song time. We also hiked to another nearby village where we treated more patients.

On Wednesday morning we started hiking back to Kemantian, leaving Marma’ at about 6 a.m. Not very long into our hike we came to a place where the trail split. Our guide told us that the trail to the right was a more direct route to Kemantian, but that we could not go that way because he had an enemy who lived down that trail, so we had to take the trail to the left. Later we came to another fork in the trail, and once again our guide steered us away from the more direct route back to Kemantian, because this time he did not know that trail. So we continued on our round-about route. At one point we left the trail completely, and our guide slashed a path for us through the jungle with his machete until we got back to a trail. As we walked we removed leeches that attached themselves to us, looking for lunch. Around noon, I was feeling like I was nearing my physical and emotional limit. The trail was very slippery and lined on both sides with thorny trees and plants that made our skin burn when we brushed them. I made the mistake of asking our guide how much further it was to Kemantian. His reply was far from encouraging: “Oh, about five hours.” Thankfully, though, we arrived home only about three hours later.

As I reflect on this trip, I am filled with gratitude to God for all the answered prayers and the promises that He fulfilled. First, my prayer had been that we would find a village ready to hear the gospel. Though Marma’ was not what I’d had in mind and was in the opposite direction I had planned to go, it was an answer to my prayer. They were eager and thirsty to hear God’s word, soaking up our stories and songs.

Second, God provided for all our needs along the way—carriers, guides, food, places to sleep and strength. Many times during that trip, I claimed the promise in Isaiah 40:31: “They shall run and not be weary, they shall walk and not faint.” God provided! Just before we left, I had been recovering from an illness, and I felt more tired than usual, but God gave me extra energy and strength.

Third, it was neat to see the way God worked in the group that went with me. Ruwina is on fire for Jesus, and she really caught the burden for the people of Marma’. Her husband is a new Christian and not yet baptized, but he was a big help to have along. Also, the trip helped him to stop smoking. He has been trying to quit, so he left his tobacco behind, and the desire for it left him during the trip. He was able to share personal testimonies to back up the education I was giving to my patients about smoking cessation! The trip pushed Lisa to her limits, but she made it and is now eager to go again. It was a joy to see Kildit telling Bible stories. There were so many other answers to prayers and ways that God worked. I am so thankful that we serve such an awesome God.

Please join me in praying for all the villages that are yet unreached throughout these mountains. Pray that Palawano workers will be willing to go. Pray that Satan’s power will be broken, and God’s power will shine forth!