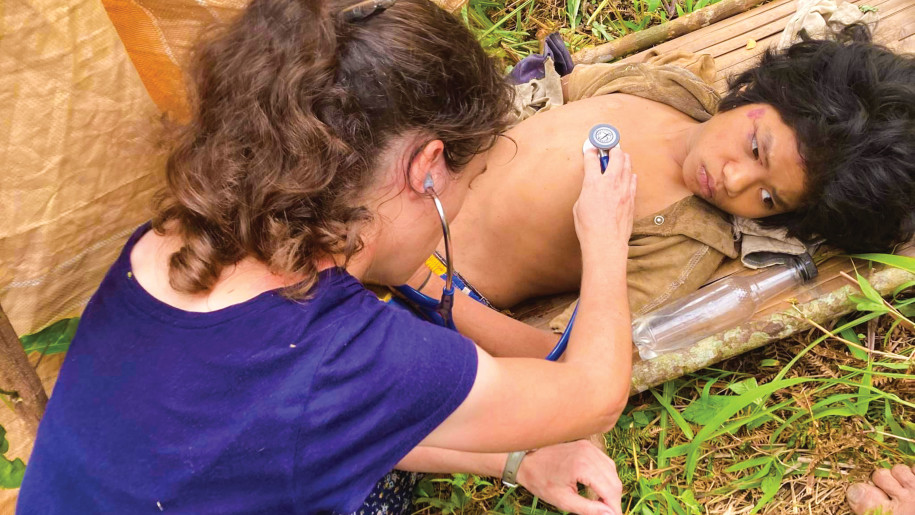 Justina: It was a busy Sunday at the clinic, seeing patients and prepping medicine, when Carrie came in and told me there was an emergency. A boy named Subliki had been severely injured. The more I pressed her for information, the worse the situation sounded. Carrie would have to leave immediately and hike quite a distance to see the patient. Daniel, the PAMAS pilot, was in Puerto and the best he could do was drive back to Brooke’s Point to get the helicopter and meet her there.

Carrie: Mislinda, our clinic helper, had come to me and said, “Carrie, come here and talk to this person!” I could tell by the tone of her voice that something was wrong. Outside I saw a teenage boy, his face covered in sweat. He explained that his younger brother had fallen 25-30 feet from a tree and impaled himself on a stick that penetrated his abdomen and exited his back, pushing part of his intestines out. That was all I needed to hear before calling Daniel.

Justina: I envisioned Carrie trying to stabilize this patient while talking to the family, running an IV, doing vital signs and pushing meds. We agreed to close the clinic and that I would join her, then we grabbed everything we could imagine needing and put it into our backpacks. Kildit, our neighbor, offered to show us the trail because neither of us had hiked to this location before. We set off, praying as we went and trying to hurry.

Carrie: As we hiked, I could not help but wonder if Subliki would live long enough for us to reach him. His condition sounded critical, and it had been two or three hours since he had fallen. It would take that much longer before we arrived at his house. If Subliki were still alive, we would stabilize him while waiting for Daniel.
It was impossible to hike very quickly, struggling up steep ascents and then slipping and sliding down the other side. I was already feeling drained from the hike and weak from having not eaten lunch. But then we met a man halfway who assured us that Subliki was still alive! That news gave me the boost I needed. Since the patient had survived this long, I reasoned that he would most likely still be alive by the time we reached him.

Justina: It took us almost 2 ½ hours to hike to his house over narrow jungles trails, along ridges, up the river, over rocky precipices and finally up the hill to his house.
Just before reaching him, we met his father, Ekluman, running down the trail looking for help. He thanked us profusely for coming and shook our hands when he saw us. We could see the sincerity in his eyes. He was very concerned about his son.
We reached Subliki. His family had done an excellent job taking care of him. They had laid him on a bamboo stretcher they had made, covered him with a tarp to keep him out of the sun and given him water to drink. I took his vital signs. Miraculously they were almost normal. He was conscious and not in pain, which is not necessarily a good sign. I started IV fluids, and Carrie called the pilot.
Neighbors told us they pulled him off the stick. Subliki’s father pointed and said, “His right leg is broken, and his right arm is bent in a half-circle shape.” On closer inspection, we also found his left wrist was crooked. We began piecing together splints.
Daniel, who is also a paramedic, arrived with the helicopter. We gladly let him take over, splinting the patient and strapping him to the backboard.
We all loaded into the helicopter. Kildit, Subliki’s older brother Anak, and I sat in the back seat with Subliki on the backboard on top of us. Carrie climbed into the front with Daniel. We were racing against the sun, so we flew straight to PAMAS, where we transferred Subliki and his brother to an airplane piloted by Sean. Carrie went also.

Carrie: As I climbed into the plane headed to Puerto, the capital, I hoped that the ambulance would be at the airport to pick us up. An hour later, we arrived at the airport with no ambulance in sight. We waited for quite some time, but it never came, so I called a friend who came, and we loaded Subliki into the back of their vehicle. Our friends drove us to the government hospital, where, after more waiting, they finally took Subliki inside while Anak and I remained outside waiting for Seth to arrive.

Carrie and Justina: We had left the clinic without food, money or flashlights, and Justina did not have her phone, but God provided for our needs. People fed us. God arranged for Justina to get back to the clinic that evening to take care of the patients and provided a warm place for Carrie to stay overnight with friends in the capital. God also arranged for our co-laborer Seth to be in the capital at that time, and Seth volunteered to stay that first night with Subliki and Anak at the hospital.

Justina: Subliki had several surgeries on his broken bones and abdomen, and the doctor told us that Subliki would likely survive if he made it through the first week. Emory, one of our student missionaries, went up to help take care of him while he remained in ICU so that Seth could return to his duties at Brooke’s Point.
Not only did Subliki make it through the first week, but he was discharged only a few days after that. He is now staying at the farm while waiting for follow-up appointments. I had the privilege of seeing him the day after he arrived. Subliki had very little pain, seemed happy, and was able to eat well. His wounds are healing nicely. We prayed together and gave thanks to God.

Carrie and Justina: Subliki is a living miracle, and we praise God for all the many ways He worked to save his life. We look forward to seeing what God’s plans are for this boy. Please join us in continuing to pray for his full recovery and that He will come to know and praise His Creator—the One who also saved his life.

Aug 27, 11:00am
Michael & Caitlyn will be sharing about their upcoming mission service in Japan during the regular service time for church.
Sermon at Worthington SDA Church
https://worthingtonoh.adventistchurch.org/
Worthington, OH