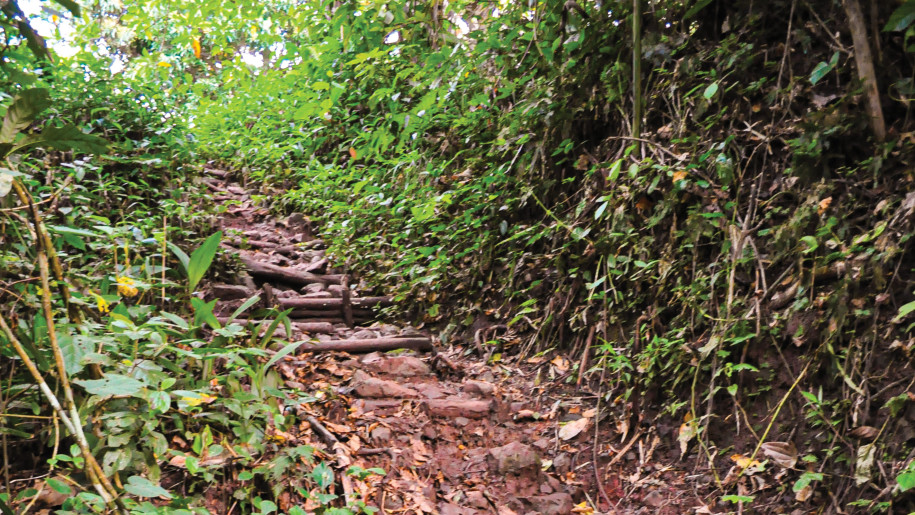 Just before noon, Piping ran into the clinic. Sweat streamed down her face as she told Carrie the situation. A young lady named Riyana had gone into labor earlier that morning and had partially delivered a breech baby, but the last that Piping had heard, the baby’s head was still stuck. Riyana had been laboring alone at home with no one to help her when Piping happened to come by.

We prayed for God’s wisdom and help as we hurriedly gathering supplies into our OB bag and raced down the trail toward Riyana’s house. We knew that the baby was probably dead. Babies need to breathe within five minutes. It had already been about three hours, and we still had half an hour of steep hiking ahead of us.

With Piping in the lead, we followed the trail down the mountain to the river, across the swinging bridge and then up, up, up until we reached Riyana’s house. A small crowd had gathered. “Is the baby out yet?” Justina asked.

“No,” they said. Sure enough, the baby boy had come out feet-first, but his head and one arm were trapped. We checked Riyana, and her vitals were stable. We checked the baby. There was no heartbeat and no pulse in the cord. It was too late for him.

We tried the normal techniques to help deliver the head and arm, but nothing worked. We called other midwives for ideas and tried their suggestions. We prayed aloud with the mother and the gathered crowd. Still no success.

Riyana was still stable, but her risk of hemorrhage was high, so we decided to transport her to the clinic where we have more resources. The women tied her to a stretcher and secured the baby’s body in her skirts, and the men prepared to carry her down the steep trail to the clinic. The trail is very narrow, even for single-file passage. So the two men on each side of the stretcher often had to find footing where there was no trail. It’s hard to describe how challenging that actually is in these steep mountains, but suffice it to say that there was very good reason why the women had tied Riyana to the stretcher. Often, a carrier would suddenly lose his footing and slide down the mountain a ways, leaving the others to balance the stretcher. Obstacles in the trail meant that they had to set the stretcher down, climb over the obstacle, and then reach across and pull Riyana over.

When we were a little more than halfway to the clinic, almost to the river, Riyana called out that the baby’s head had been delivered. We immediately checked her. Miraculously, she had no hemorrhaging or any other complications. Once the baby was out, we saw why there had been such trouble. He had spina bifida and hydrocephalus, a condition in which retained fluid causes the head to grow abnormally large. It was a miracle that he was out.

In true Palawano style, Riyana and her husband were very stoic. But at the clinic that night, Riyana made a few comments that let us know she was thinking about her baby. We helped her clean up, started her on antibiotics and sat with her in her grief.

Riyana used to attend our high school, but she has turned away from the truth she learned there. It was nice to reconnect with her as she convalesced at the clinic for a couple days. We see that God was able to use even this sad experience as an opportunity to bring us back together.

Please keep Riyana and her husband in your prayers, that they will find comfort in God as they grieve the loss of their baby and will allow our precious Savior to draw them to Himself.