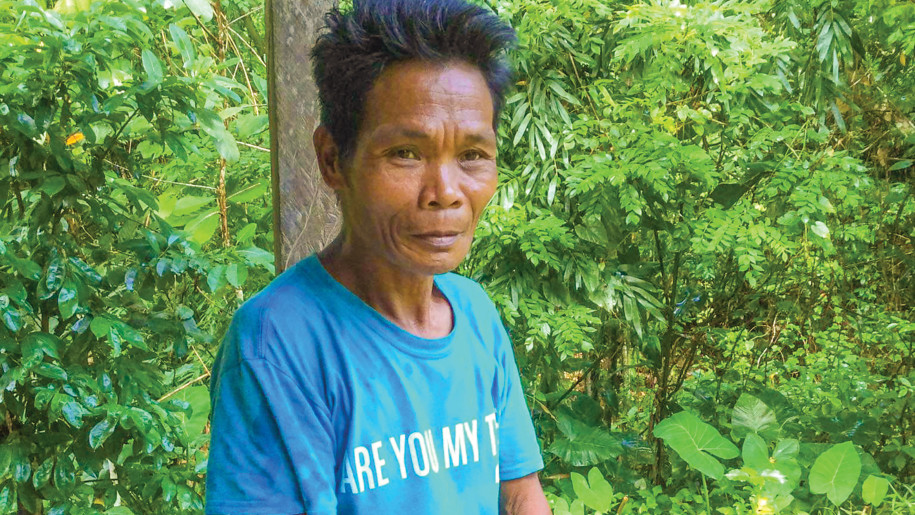 “Tears came to our eyes when we heard about Maman Rupid,” Ray and Dawn Spoon commented after the church service. They saw the fruit from labors and sacrifices begun 30 years ago.

Maman Rupid (Maman means uncle in Palawan) has been friends with the missionaries since the start of the Palawan project in the early 1990s. He helped the Spoons acclimate to living in the jungle and taught them many things about the Palawan culture. Whenever they had a question about something, Maman Rupid was happy to answer and help them. He came to church in the beginning but never showed much interest on a personal level. As the years passed, he continued to be friends with the missionaries, helping them and being a part of their lives, but the relationships tended to stay on a friend level, and he did not show much interest in spiritual things.

Maman Rupid started working on the project quite consistently last year. He is good at building and repairing things and became a huge help with upkeep and maintenance. He also started to show sincere interest in spiritual matters. He and Leonda George began having some terrific spiritual conversations, and he has become eager to learn and understand more about God. At the same time, Kildit, a Palawano student, and I led out in a small group in his village, and he started to attend fairly regularly. He would cheerfully come, mainly to listen, and then leave once the story was over. You can read a story about Kildit and Maman Rupid in the November 2021 issue.

As Maman kept showing a greater interest, our team talked and compared what we had been observing. It was so exciting to see. His eagerness to participate with the group and in conversations was increasing! We realized that he was ready for Bible studies, so Kildit and I studied with him in his village. He soaked everything in and said he wanted to learn how to pray and sing. Since then, he always has a praise to share during the thanksgiving portion of the group and often has a prayer request. While I have been on furlough, Kildit and one of our Filipino missionaries have taken over that group.

We praise God for the work that He has done and is still doing in Maman Rupid’s life. Many seeds have been planted — beginning with the Spoons, then the Georges, plus all the student missionaries and Filipino staff that have come through. Sometimes it can feel like there are no results to be seen out of all the sacrifice, but it is at those times that we must remember 1 Corinthians 3:6-9, “I have planted, Apollos watered; but God gave the increase…For we are laborers together with God: ye are God’s husbandry, ye are God’s building.” We must be faithful in the tasks that God has given us and leave the results up to Him.