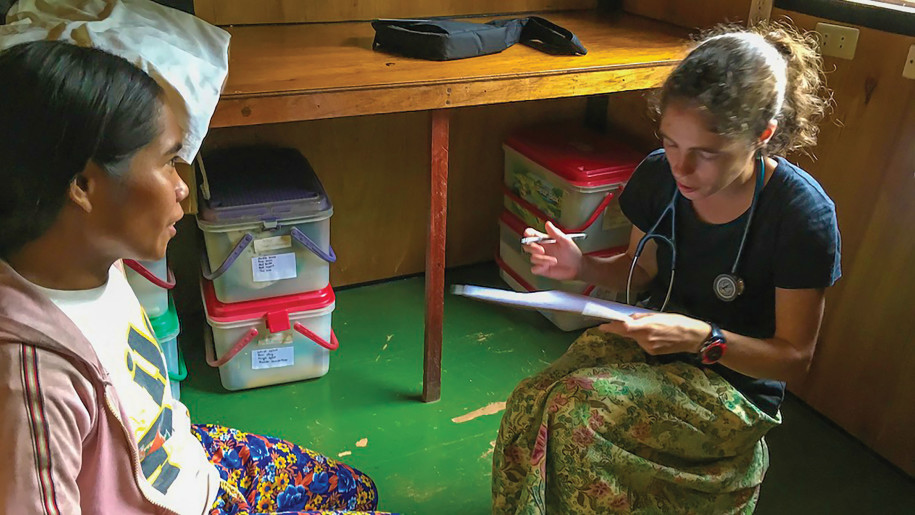 It was Sunday afternoon, and we were cleaning up the clinic before heading home. Sunday is typically our busiest day, and we often see anywhere from 30-60 patients. Marybell, who helps us with pulling charts and taking vital signs, came running up with Kibim.

Kibim is about 10 years old and comes from a really messed-up family. Palawano witchdoctors have a spell that makes people fall in love with a specific person. This spell was used on Kibim’s mother, Bi. The problem is that the spell sometimes makes the victim become mentally imbalanced, and that is what happened in Bi’s case. You never know what she will do or say. One of Bi’s children has to live with another family because Bi is abusive to her. Bi’s husband is left to care and provide for the children. Kibim is the oldest child. He has two sisters, ages eight and 18 months.

While in the market that afternoon, Marybell had seen Kibim and noticed that he was having trouble breathing. No one from Kibim’s family would bring him to the clinic or come with him, so Marybell had brought him herself. He was wheezing and obviously working hard to breathe, so I gave him several nebulizer treatments and steam with eucalyptus oil. His breathing improved. When I tried to give him medicines, he didn’t understand my instructions, so I asked him to show me where he lived so that I could give the instructions to his dad.

Kibim led me down the trail past the market, past the Georges’ house, off to another side trail, past my friend Rusma’s house, past Barus’s house whose baby I delivered. Finally, we came to a tiny trail I had never noticed before that led off into the jungle. The trail was slippery and steep. I slowed down, grasping the grass and trees at the edge of the trail to keep my balance. Kibim moved much faster than I did, but he would stop and wait for me to catch up. At a little creek, we met Kibim’s sister. I think she was coming to see why her brother had been gone so long.

We finally made it to Kibim’s tiny house in a little clearing in the middle of the jungle. There was nothing around the little bamboo structure, and no neighbors nearby. The house was one small room. It had a bamboo floor, a partial roof of matted leaves, and a single wall of woven bamboo. I greeted Kibim’s dad and sisters. His mother wasn’t at home. I showed Kibim’s dad the medicine and how to give it to Kibim.

As I said goodbye to this family, I thought about how difficult their lives are. Kibim often doesn’t know where his mother is, and when she is home, he never knows what she might say or do. The family has an inadequate house, no decent clothes and precious little food. Kibim can’t even take time to go to school or to our church for fellowship.

Please keep Kibim and his family in your prayers. Pray that his mother will be able to find freedom in Jesus from the curse of the spirits. Pray that Kibim and his sisters will find in Jesus the friend that they so desperately need. Pray that the whole family will find their place in the beautiful and secure family of God.